Learning to Live Together Community of Practice in Athens

Following the Basic Training Workshop on theLearning to Live Together Programmethat was held in September 2013 in Athens, a monitoring process started at the end of October to support the implementation and adaptation of the programme in the educational institutions from where the participants came from. 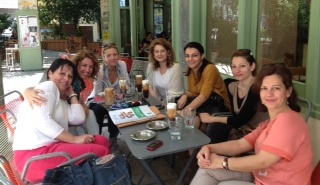 With the purpose of creating a Community of Practice of facilitators of the Learning to Live Together (LTLT) programme in Athens, periodical meetings were organized after the training workshop to share experiences and support each other.  From the 22 teachers that were trained in September 2013, eight are currently implementing the Learning to Live Together in their schools and at least six others have used it in sporadic activities in their teaching.

On 11 May a meeting was held with some of the teachers implementing the programme to share the experiences and challenges implementing it, and provide mutual feedback to continue improving their work.  During the implementation period all teachers have kept an Observation log where they write their notes about the implementation of the programme, their insights and reflections.  The logs also contain in several ocassions quotes from the children and some keep folders with samples of the students’ work.

Kindergarten.  The programme has been used for two months with 25 children, 21 toddlers (5-6 years old) and 4 pre toddlers (4-5) in activities related to getting to know each other and to appreciate one another. 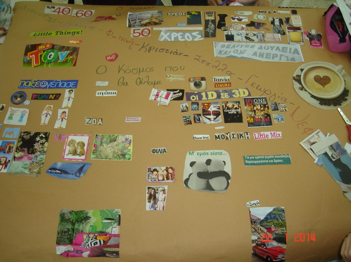 Elementary school.  Three teachers have used the programme during the flexible zone and one in the context of Civic Education.  One of the teachers have implemented the programme with 17 students from 6th Grade (11-12 years old) once a week from October 2013 to March 2014; another teacher worked with two classes: 12 students from 5th Grade (10-12 years old) once a week during flexible zone time from October until May (almost 8 months by the time school ends). She has also been using activities in the context of other lessons as her students got used to the methodology of LTLT which made the content of other subjects more interesting. In particularly, she used it in Geography, Religion and Civic Education. She also used it with in flexible zone with the 11 students of 4th Grade (9-10 years old). Two teachers more have used the programme with 22 students from 6th grade (11-12 years of age) once a week from November to May (6 months).  An additional teacher has used the programme in Civic Education with the two classes of the 6th grade, wit a total of 23 students (11-13). She has used activities to promote “understanding self and others” for 3 months (October-December).
High School. Teachers have used the programme during Experiential/Participatory Activities an innovation that were introduced in the Greek curriculum of the 1st Grade of High School.  The activities take place one hour a week for every class during which the students can choose a topic of their interest to explore with a teacher. Two teachers have used the Learning to Live Together Programme during these hours with students from the 1st Grade of High School.  One of them implemented it with two classes –16 students each, 12-13 years old – for 7 months. The second teacher worked with one class of 20 students throughout the school year.
It is noteworthy how all the teachers who implemented the programme took the initiative to make modifications in order for the activities and concepts to better suit their context but also the age of their students as they knew the manual is addressed to children over 12 years of age.  The following paragraphs provide information about some of the challenges faced by the teachers and the impact on the students.
Challenges
All teachers reported feelings of “deficiency” and inadequacy in dealing with the interfaith dimension of Learning to Live Together which prevented them from implementing any activity that dealt with religions and faiths.
Along the same lines, they felt insecure and uncomfortable using meditation and even  silence in several cases as these are unfamiliar elements to the Greek culture. There was only one exception where a teacher used silence in a physical education class through an activity called: “The game of silence”.
Angeliki Aroni, Official Trainer of Arigatou International and Coordinator of the LTLT Community of Practice n Greece says:  “It is my firm belief that the personality and individual traits and practices of the teachers affect the program. Learning to Live Together is not a content-based program like most of the manuals on Ethics and Human Rights Education but rather an approach and life philosophy. This is why I believe teachers need more additional support and guidance to internalize some of the concepts of the LTLT”.
One of the teachers said: “On several occasions I felt insecure as the content of the manual was something I learned but not really practiced nor mastered”.

Another challenge noticed during the implemenation was the nature of the participatory activities which were unfamiliar and uncomfortable for the students who are mostly used to teacher-centred education especially in older ages.  “It is very rare that they students are required to be so actively engaged in an activity; at the beginning they were reluctant and even negative. It was the biggest reward and lesson learned though when towards the end of the year students were looking forward to having the activities and reported their pleasure in implementing them.”

Impact on the students

One of the changes that almost all teachers noticed in their students was the gradual improvement of their conversation skills. As time went by students were able and willing to share more during the reflection phase but also to listen more emphatically to the others. They disturbed less and were more attentive.

A second observation was that the Motivation element of the learning process of LTLT proved to be an excellent pedagogical tool as it made students more eager and open to what followed, widening their interest and perception on the content that was introduced after. It is a basic element that several teachers thought of applying it also in their other school subjects.
Spirituality, being the golden thread of the manual, when practiced in a long term basis became a very effective and valuable means of transforming students. One of the teachers who have been using silence and other introspective activities, reported more “mature” and empathic students due to this.
Certain activities, like “Reach for the stars”, provided students who were in dispute with each other the space and opportunity to come closer and to realize for the first time that they share not only differences but similarities as well. This was very important for a pair of Syrians who came from conflicting political parties in the country’s current turmoil. The approach of looking for similarities despite the obvious differences among students’ religious affiliations and cultures became apparent in other activities, too, when for example students while presenting customs or religious celebrations they started by stating the things and elements they share with others.
A high school student with learning disabilities expressed her pleasure and satisfaction from the activities of LTLT as it was the only hour during the week that she didn’t feel like a “loser”. Another one, being among the “trouble makers”, boisterous classmate, found his place within the cooperative-based learning activities and became a paragon of cooperative spirit within his team!
Last but not least an important observation was that the day of the implementation of the program even the observable behaviour of the students was changed as they seem to be less aggressive, more polite and more respectful towards the teachers and classmates. However, as the days went by this behaviour diminished in some studenets. This provides a strong argument to develop a school- based approach, as training all the teaching staff of a school would help create a “culture of LTLT” which will prevail all day long during all week making its impact more sustainable.
One of the Elementary teachers, also reported that working with LTLT had a great impact on her own way of teaching in general. The methodologies and the approach stressed by the trainers during the training workshop, particularly related to the importance of context sensitivity and awareness of participants’ characteristics and situations, as well as the embedded values in our approach and method and not just as content, were transferred in her teaching skills.
Future plans
All the teachers said that they are planning to work with LTLT during the next school year as they feel more comfortable with it regarding the concepts, the methods and the techniques. They also expressed the intention to work more with Module 2 of the LTLT which they didn’t really touch this year and perhaps organize something together  at the end of the school year.  A second meeting will be held in Athens with the teachers involved in the process and Arigatou International Geneva staff to discuss an action plan during the next six months.
Arigatou International Geneva welcomes the great work done by teachers in Athens and supports the continuation of their activities by providing further technical assistance to their activities.  Special thanks goes to Dr Angeliki Aroni, Coordinator of the Community of Practice in Greece, for her support, production of this report and for her training support througout this year.
BACK TO LATEST NEWS
Share on Facebook
Share on Twitter
Share via Email
Share on Facebook
Share on Twitter
Share via Email
Explore Our Global Initiatives
GNRC
ETHICS EDUCATION
PRAYER AND ACTION
END CHILD POVERTY