A capacity building workshop for young people and youth leaders was held in Geneva, Switzerland 27 -30 January to equip participants with peace building skills and tools to become more active in the GNRC.  The workshop helped bringing together youth and adults and finding ways to work together towards common goals.Read more…

Arigatou International started the New Year with inspiring steps. The Geneva office organized a four-day workshop for the young people of the GNRC. The workshop titled Youth for Peace, held from the 26 to the 30 January 2009, aimed to equip the participants with peace building skills and leadership tools that allow them to lead youth activities and realize concrete plans in their countries. 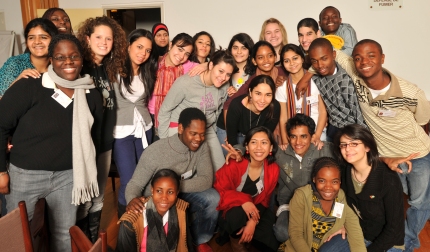 The 24 youth participants and 11 youth leaders came from 12 countries: Azerbaijan, Belgium, Colombia, El Salvador, India, Israel, Jordan, Kenya, Spain, Sri Lanka, Tanzania and the United States. During the first three days, the youth had separate sessions at the Ecumenical Center in Geneva, whereas the youth leaders were trained in coaching skills during the first two days. Parallel to the workshop, the GNRC regional coordinators had their regular meeting and on the third day they came together with the youth leaders to discuss issues related to child participation, interfaith dialogue and how to support the youth activities at the GNRC local and regional levels.

A video of Rev. Keishi Miyamoto, Representative of the Arigatou Foundation, welcoming the participants and encouraging the youth to continue making a difference in their societies was shown during the opening ceremony. Mr. Shozo Fujita, Secretary General of the Arigatou Foundation and Mr. Atsushi Iwasaki, GNRC Secretary General conveyed their gratitude for the youth participation in the workshop and Ms. Agneta Ucko, Director Arigatou International explained its objectives.

On the first day the youth group got to know each other through ice breakers and team building activities. They also got to know themselves better in order to recognize the qualities they have to contribute to the GNRC. They were introduced to the mandala circle to reflect about their lives and the impact they can make in the world. At the end of the day they learned how to improve their communications and listening skills. 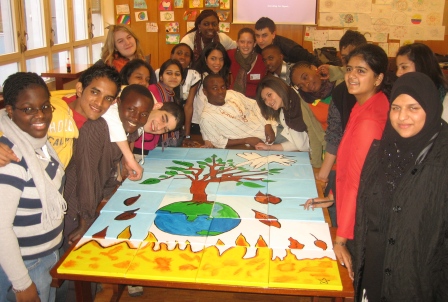 The youth participants got the opportunity to sharpen their reflecting skills the next day as they were introduced to different meditation techniques. They also learned how to solve conflicts in peaceful ways and discussed non violent alternatives after watching a part of the Gandhi film. The participants prepared small role-plays in groups and discussed how to use mediation, negotiation, create win-win situations and creative solutions to conflicts. On the same day, they worked together on an art project for which they had to select one of their drawings and put together their ideas to realize it, thus applying some of the skills they got during the previous sessions.

Most of the youth participants found the third day to be the most fruitful as they learned how to run a project and how to facilitate sessions with other youth. The highlight of the day was the musical evening prepared by the youth themselves. Each country made very interesting performances and involved the audience to join and to have fun with their dances and songs. Some guest youth from Geneva who produce their own music helped in this event and performed different types of music, which contributed to make a very memorable evening for all. 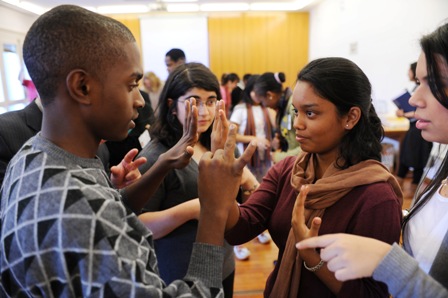 The last day was spent with the other two groups: youth leaders and GNRC coordinators. Together, they reflected on how to bridge the generational gap and made plans to realize concrete contributions to the GNRC in their regions. The day was concluded with presentation of their plans. Some of the plans include to form peace clubs or youth groups in South Asia, develop a chil-friendly knowledge pack with poems, stories and cultural information of the Central Asia region, organize conferences in schools and universities in Belgium and Spain, strengthen the youth network in Latin America, recruit new people for the youth group in Israel, work with media in Africa, organize yearly regional workshops in the Arab States and collaborate with other interfaith youth groups in the United States..

The workshop ended with a cheerful atmosphere at a typical Swiss restaurant, where the participants had the chance to enjoy Swiss music and spent a nice time together. After an intensive four-day work, they got motivated to apply what they learned to realize their plans once they return to their countries.

Special thanks go to the facilitators Charlotte Venema, David Arond, Andres Guerrero, Hans Ucko, Nanda Moenandar, Agneta Ucko and Maria Lucia Uribe, and to the Geneva team for all the preparations and logistical support.

To see the Report of the Workshop, please click here