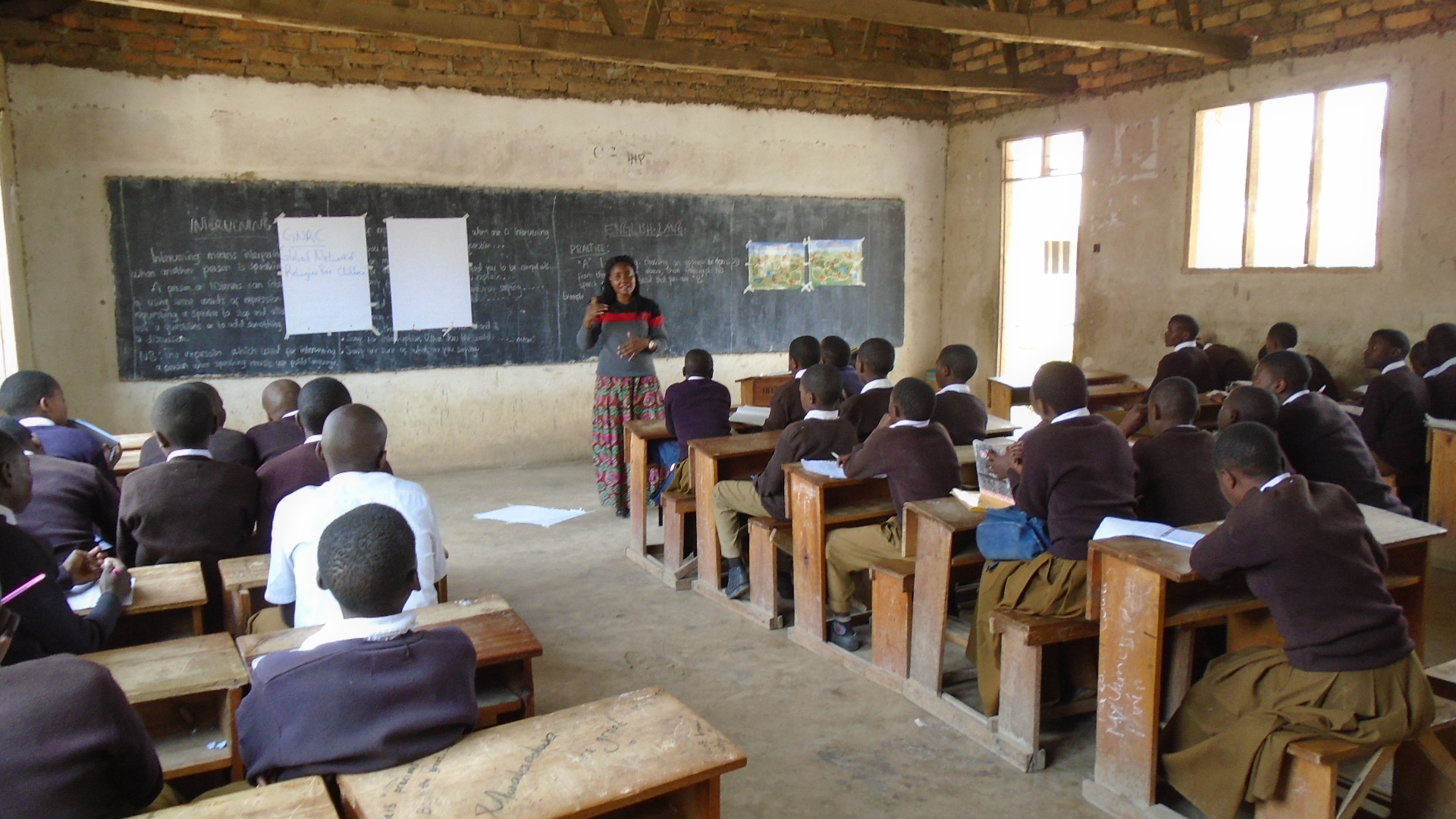 “In 2007 at Azania Secondary School, I overhead from my classmates about the Peace Club initiative at school. “Peace?” I asked, not sure why I was intrigued, but after one meeting I became overly interested in the idea to take an active peacebuilding role.” This is how Yusuph Masanja, Coordinator of GNRC (Global Network of Religions) Tanzania, describes his first contact with the GNRC Peace Clubs. Since then, he has stayed on the front line advocating for the GNRC mission.

The road taken by Clara Mduma was quite similar. Clara joined GNRC Tanzania in 2004 when she was only 14 years old. Two years later she participated in the first international workshop organized by Arigatou International in Geneva to test the initial idea of the Learning to Live Together Programme.

Taking part in Learning to Live Together activities enabled her to understand her responsibilities in her community and to mobilize children and youth. In 2008, she assembled her class and all Peace Clubs in Dar es Salaam to write a paper about the objectives that children wanted to add to the Child Act Bill, which was being discussed at the moment. This influenced the government to organize a meeting to collect the children’s views before the Child Act Bill was passed into law in 2009.

After completing her studies and while she was working for Art Against Poverty, (a program for youth coming from vulnerable backgrounds), and volunteering to introduce clown therapy for children at a hospital, she participated in a Training Workshop to become a Facilitator of the Learning to Live Together Programme. Later in 2017, she became an official Learning to Live Together Trainer.

In this interview we talked with this two outstanding young adults, who were raised in the Peace Club ecosystem, learning about responsibility, empathy, and respect at a young age, and working hard for youth participation, the rights of the child and peacebuilding in Tanzania.

1- Clara, how has the Learning to Live together influence your upbringing?

Being part of the LTLT program not only shaped me but shaped the other peace club members I was involved with. Ethics education was not in our school curriculum growing up, so being a part of the program has nurtured me and helped me grow spiritually. It made me aware of my responsibilities and the role I could have with contributing to positive change within my community. I was able to become a champion and a child rights activist; I led activities in my school that contributed to the wellbeing of children, and it was all possible not just because of my passion in my work, but also because of the knowledge I gained from the LTLT program. The LTLT program helped me understand my role and responsibility towards my community and helped me to discover and understand myself better with what I want to become.

I am very grateful that I was part of the program, and now I can work to address the issue of violence against children at the grassroots level, especially with bullying and corporal punishment in schools. It is my hope that after the implementation of the LTLT in the Peace Clubs, teachers themselves will be able to come up with a positive alternative to punishment that will contribute to the child’s development.

2- What is your role in the GNRC Peace Clubs?

Currently, my role in the Peace Clubs is mentoring members; I meet them often for training, but I also assist them in activities that they have prepared in their respective schools. Most young people mentioned that, for them, it is different being in a Peace Club session than in a classroom, since they are encouraged to be creative and design their projects and activities. Plus, there are people like us (teachers and volunteers) to assist throughout the process. Also as a trainer, I train teachers and volunteers so they can implement ethics education programs in schools. So far I have train 29 teachers, and I give them technical support during the implementation.

3- Yusuph, tell us about your journey with Arigatou International and the GNRC.

In 2008, I completed my secondary education and requested for a volunteering position at GNRC; it was then when I started to learn even more about GNRC mission. I volunteered for 6 months as an Assistant Field Officer and took part in Peace Caravan activities outside my region. After that, I started a Peace Club in my neighborhood and continued the work.

4- Yusuph and Clara, please tell us what are the GNRC Peace Clubs?

The idea of the Peace Clubs emerged in 2002 when GNRC Africa, then called ESANRC (East and Southern Africa Network of Religions for Children) convened a team of religious leaders and experts in Dar es Salaam. The idea was to brainstorm on what could be done to cushion our children and youth from growing intolerance and subsequently be co-opted by violent conflicts and activities across the Eastern and Southern Africa region. This is when the idea of Peace Clubs emerged.

Peace Clubs are a platform used by GNRC Tanzania to bring together children and youth of different faith and cultural backgrounds to facilitate mutual understanding and build a culture of peace in Tanzania. It is through these clubs where children and youth are nurtured to become peace ambassadors by strengthening their commitment to justice, respect to human rights and dignity.

Tanzania involves children and youth from 9 years to 23 years who are in schools, community, orphanage centers and children from broken homes who end up in street. In total so far, GNRC has 75 active Peace Clubs, which reach 2,500 youth every year, covering five regions in Tanzania mainland and two regions in Zanzibar.

Tanzania is an example of children’s active participation in GNRC activities and is a concrete model of how to empower children and youth through interactive methodologies and a shared vision to transform their society.

Tanzania has implemented several activities, and their members often organize and join local, national and international campaigns as means to reach the community as peace ambassadors. Peace clubs, which are in schools, usually meet once a week and they have special extra-curricular sessions that last around 40-50 minutes, usually on Thursdays or Fridays. However, those who are not in school meet on Saturdays, and most of them engage in different art activities as a mean to raise awareness in the community. Since started, it has mentored more than 2,000 children and youth in Tanzania.

5- What is the main goal of the GNRC Peace Clubs?

Peace Clubs aim to promote the culture of peace and interaction between young people from different backgrounds and help to create a peaceful society in Tanzania. Peace Clubs help members to develop leadership skills as peace ambassadors that they can use to address issues that affect society like poverty, violence against children, environment and countering violent extremism.

The objectives of the Peace Clubs are to provide peace and ethics education for children; to empower young people to be peace ambassadors in their community; to help young people explore their role within the community and facilitate positive changes, and to create a platform where young people unleashed their talents.

6- How has been the implementation of the Learning to Live Together in the Peace Clubs?

Since LTLT Program was launched, GNRC Tanzania has trained Peace Club leaders, youth volunteers and teachers in peace and ethics education using the manual. Peace Clubs have been implementing the Programs in both schools and communities by engaging in community awareness campaigns on issues that affect the well-being of children through arts, debates, forums, and dialogue.

7- How does the implementation of the Learning to Live Together in the Peace Clubs help to end violence against children and foster social cohesion in the Tanzanian society?

The LTLT program has been facilitating the creation of Tanzania Young People Peace Ambassadors, who have been working together to address the issues affecting children. The Peace Club national campaign debate was used on the Child Act Bill to engage children in the amendment process.

Peace Clubs were able to mobilize students within the schools and started an initiative called 100 YETU. The Swahili name means “our hundred”, and it is where members of Peace Clubs contribute 100 Tanzanian Shilling weekly to support children in need. The program started in early 2017, and they are able to support up to five children with schools fees. The program was initiated by Kibasila Secondary School, Dar es Salaam, and is now being implemented in the Dodoma and Mbeya Region.

Peace Clubs offer space and avenues for young people to learn and cooperate with others in the community. Youth-led programs (which were initiated by two members of Peace Clubs in primary schools) were created for advocacy campaigns on children’s right and community services to end child marriage.

8- How do you work closely with religious communities to foster learning to live together in the Peace Clubs?

Religious leaders have also been an important part of the local and national campaign. Young people have organized activities to address the government through the interfaith peace caravan in 2007, 2008 and 2009, and the climate justice campaign in 2013 to 2014. Religious leaders have played an important role to make this program a success by hosting, advising and assist throughout the journey.

9- Yusuph, how do you see the future of the Peace Clubs?

The future of the Peace Clubs is exciting! It has been growing so fast in the past two years. In 2016, they expanded in four new regions in Tanzania and involved more than 2,500 students. Teachers, education officers, religious leaders, social welfare officers and general public appreciate GNRC for nurturing children and youth through the Peace Clubs. As a network, the Peace Clubs offer the world’s best example of mass cooperation in tackling global issues. 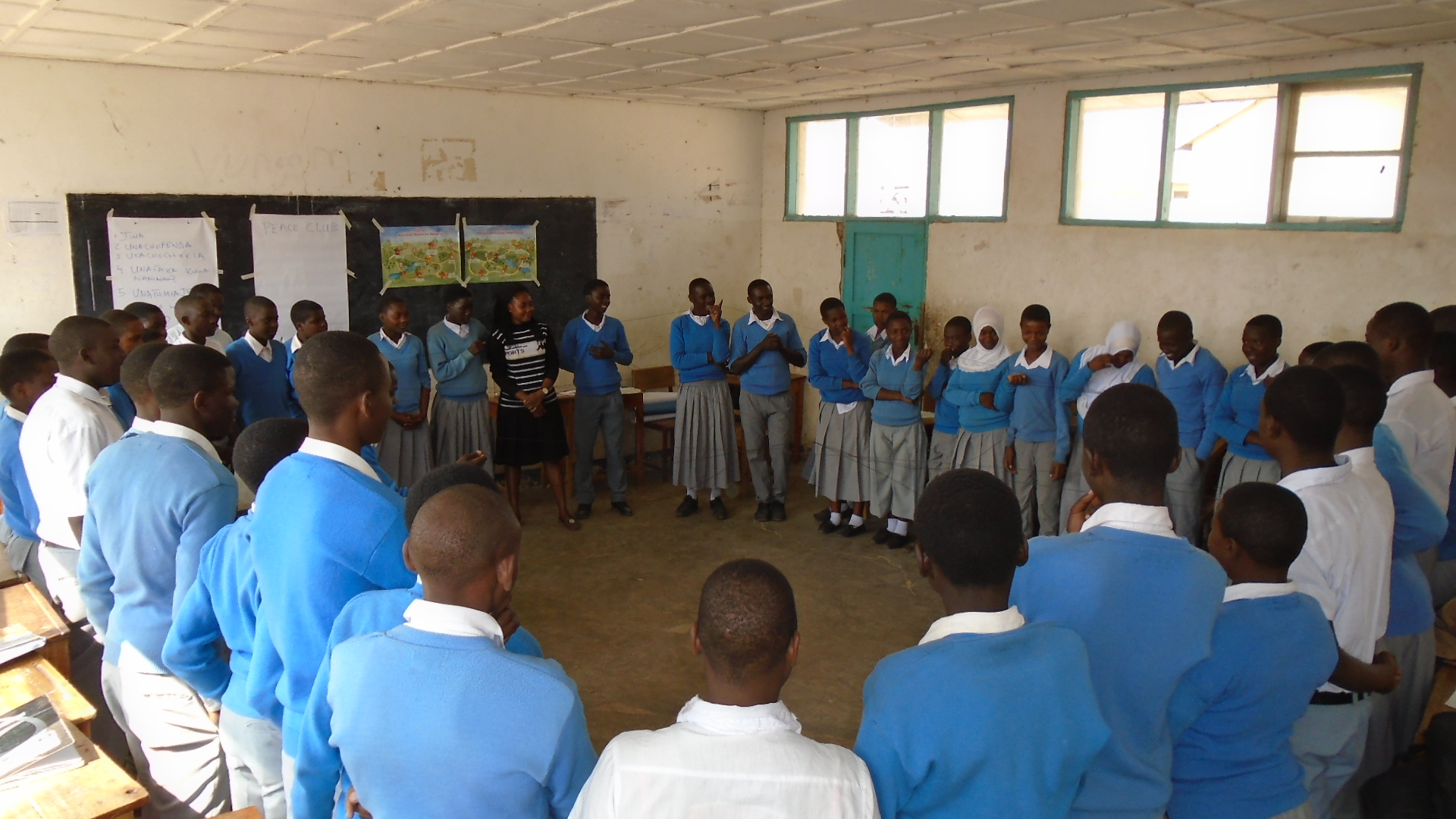