Swimming Lesson – A Jewish Perspective on the role of the Family 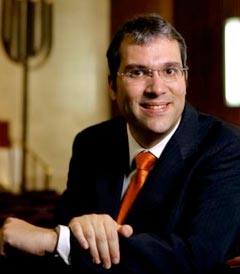 Michel Schlesinger graduated as bachelor of law at the Law School of the University of São Paulo (USP) in 1999. He carried out his rabbinical studies and took his master degree in Jerusalem, Israel, at the Schechter Institute (2005). In the United States of America, he worked in a Jewish camp, the Ramah Camp of New England, and trained to give support to sick people and their families at the Jewish Pastoral Care Institute in the city o fNew York. Since 2005 he is Rabbi of the Congregação Israelita Paulista (CIP) (São Paulo Israelite Congregation). During his sabbatical year in 2012, he spent three months in New York, where he visited Jewish institutions and studied Talmud at the Jewish Theological Seminary. Rabbi Schlesinger is the representative of the Israelite Confederation of Brazil (Conib) for interfaith dialogue and coordinator of the Jewish delegation at National Commission of Catholic-Jewish Dialogue at the CNBB. In In 2010 he finished his studies in Synagogue Management at the Rabbinical Management Institute in Los Angeles. Rabbi Michel Schlesinger is married to the anthropologist Juliana Portenoy Schlesinger and is the father of two girls, Tamar and Naomi.

One can imagine why our savants established precisely these four obligations. After all, they are connected with the main concerns of the past. But how would it be today? How could we update each of these four bonds?

The first responsibility is to teach Judaism to the children. The Torah establishes the obligation of parents to raise their children by the means of words contained in the Shema Yisrael prayer. “VeShinantám LeVanecha VeDibarta Bam, and you’ll teach them (the words of the Shema) to your children and will talk about them.”

And in our days, what does it mean to assume the responsibility for the Jewish education of children? Some will argue that this means putting the children in a Jewish school. Others, who decided to enrol children in secular schools, will seek a complementary teaching of Judaism.

I would like to propose, however, another interpretation. I think that in the 21st century, to teach Judaism to the children means to build a home where Judaism is a value present in every decision made.

Therefore, parents that before choosing the family’s vacation take into account the Jewish calendar to confirm that it does not coincide with any festivity are saying, with concrete actions, that Judaism is relevant to them. A house where Fridays’ dinner is prepared in a careful way, including ritual elements such as candles, wine and challah loaves, is demonstrating the relevance of that day for the family. Parents who contribute to the community with their resources, whether it is their knowledge, their time, their money, or all at once, are transmitting values ​​through their attitudes and leaving a long-lasting mark in these children by their example.

The second responsibility is to teach a profession. In the past, teaching a professional activity meant to allow the child, after a certain age, to accompany the parents and learn their arts. Normally, the son of a shoemaker would help with small tasks in the family’s shoe shop until he could one day take his own workbench. And so it was with the tailor, with the goldsmith, with schochet.

In our days, parents teach their art to children through the ethical exercise of their professions. Professionals who put ethics first are transmitting an immeasurable value to their children.

Thus it is written, “Teach a child the way he/she should go, and even in old age he/she will not deviate from it” (Proverbs 22: 6). Children who are lucky enough to grow up in a home where mother and father play their professions with an intense ethical concern, are being nurtured to one day also be ethical professionals. This is not a small challenge. Being an ethical professional means often to forego temptations, to tread more complex paths, and sometimes earn less money. However, for those who believe in the value of ethics, there are no alternatives. And so, through being role models, parents are teaching an art to their children.

The third requirement is to ensure their children get married. In the past, marriages were mostly arranged. Even before the children were born they were often promised to the children of another couple, who may not even have been expecting a child yet. The arrangements were motivated by two main reasons: money and lineage (iírrus). Therefore, a wealthy family had a larger margin of choice than a simple family. The same would happen with a family who had generations of respected rabbis. This was also considered a critical factor in the negotiation of a shidduch.

In our days, what does it means to ensure one’s children get married? I would propose that the key to this question lies in the modelling relationship that parents establish between them. Parents who love each other and respect each other, create spaces for dialogue, have flexibility within the relationship, honour one another, support each other and admire each other transmit an encouraging message: “It is worth it building a life with someone you love.” I believe that, today, to ensure a son or daughter get married means building with the spouse an inspiring relationship so the children can see and be inspired to do the same.

We live in a time when many parents are separated. If in my grandparents’ generation divorce was a big taboo and people stayed married even when the respect and love had long ended, in my parents’ generation the possibility of separation “has been discovered”, which led to an avalanche of divorces. While many of these were often handled in a thoughtful and careful manner, so many others were untimely and hasty. The result was a very large number of broken marriages.

I believe, however, that even in these cases, divorced parents should strive to convey an encouraging message to their children. Every case is a new universe; and anyhow I witness that one can undo a marriage with dignity. Thus, the new generations will understand that even when a marriage ends, it is possible to do it with dialogue and respect.

The most unusual of the four responsibilities is to teach a son or daughter how to swim. One can understand how this duty was essential in the past. At a time when water transportation means were widely used and represented a great danger, knowing how to swim could mean the difference between survival and drowning. Parents who put their children in the water in the child’s early age, fulfilled their responsibility towards the physical safety of children who could defend themselves in case of a shipwreck.

I want to suggest, however, that the responsibility of teaching children to swim is to be read metaphorically. One who enters the waters of life needs to swim with the tide and sometimes against it.

We live in a time when everyone wants to be popular. The notoriety of a person is measured by the number of followers on his/her Twitter or the number of friends on Facebook.

More than ever, parents need to prepare their children to pay the price of authenticity, coherence, of opposition, even when it is extremely unpopular to do or be so. As important as to swim with the tide and get the sympathy of the majority is to have the necessary courage to say “no”. Being true to one’s beliefs can mean to say what others wouldn’t want to hear. When the popular is seen as wrong through the eyes of our children, their muscles need to be well trained so that they have the necessary courage to be unpopular.

“Swimming teacher parents” are those who train their children to listen to others and at the same time to be true to themselves.

May the twentieth anniversary of the International Year of the Family be a good opportunity to revisit our roles as mothers and fathers and review if we are transmitting Torah in a home where Judaism is taken into account; teaching a profession through the ethical exercise of our art; encouraging marriage through a respectful relationship with the current or former life partner; and ultimately creating swimmers able to pay the price of unpopularity when this is the right thing to do.