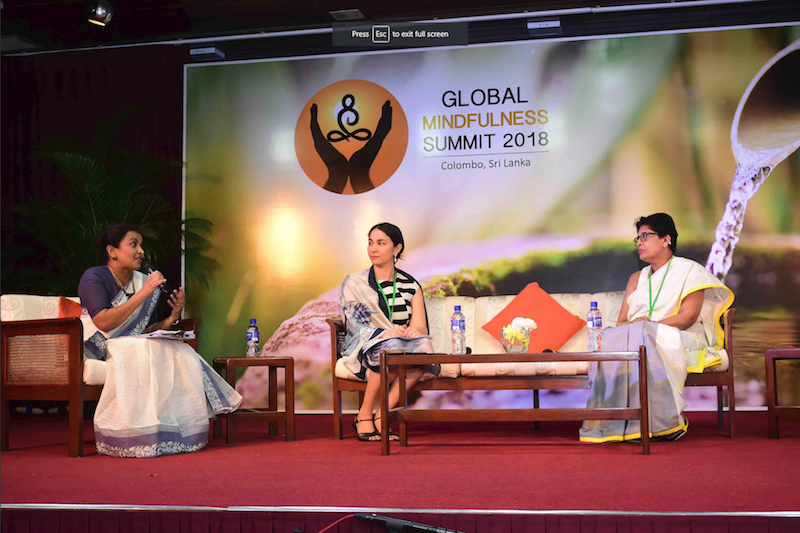 The summit, organized by the Sati Pasala Foundation with the cooperation of governmental, non-governmental and cooperate-sector institutions, brought together speakers and panelists from around the world for three days of influential discussions regarding mindfulness.

The speakers and panelists at the Summit came from all sectors of society, as it was an assembly of academics, scientists, management consultants, government leaders and politicians, diplomats, medical specialists, school leaders, and religious leaders of all faiths.

The summit served to build partnerships among different nations, cultures, ethnicities, and religions to spread the message of the power of mindfulness and the influence it can have as a peacebuilding mechanism. As Venerable U. Dhammajiva stated in his opening statement, “All the parts, all the religious and other groups must come together, and work together, and mindfulness binds it all together.”

During the three days, there were discussions regarding the role mindfulness can play with promoting diversity and acceptance, helping our environment and promoting sustainability, strengthening children’s spirituality to end violence against children, and the positive mental and physical impacts mindfulness can have on a person.

Mrs. Maria Lucia Uribe presented about the importance of spirituality in young children. As she described in her presentation, spirituality is “an innate and natural capacity…[it is] a capacity to see ourselves as part of something bigger than us and that helps us move beyond, [and] to transcend.” Violence that is perpetrated against children – in any form, be it physical or emotional, or through negligence, does not only violate children’s wellbeing but also their spiritual safety and development, as it breaks their connections with others and their sense of trust and respect for other human beings. In order to support children and youth to develop their spirituality, it is necessary to develop safe environments – environments that are free from violence and abuse. Environments that respect the agency of the child and help them develop as individuals in their own right.

More often than not, families and schools, attempt to kill children’s innate spirituality by punishing them, by boxing them in the way we want them to be. We need to foster a spirituality of “moving beyond”, which is interested in the ultimate, not in the immediate. “Ultimately, mindfulness as a tool for spiritual development should help children and youth to develop their sense of belonging, of being, of connecting with others, of becoming who they want to become and transform themselves and their societies”, said Mrs. Uribe when looking at the connection between mindfulness and spirituality.

When dealing with the repercussions of violence, mindfulness goes beyond just allowing the victim heal, but can also be used as a preventative strategy to preventing violence before it happens. Caregivers and parents should use mindfulness when raising a child, as it allows them to see the impact their actions have on the child, and how it might hurt their child’s spiritual wellbeing.

Mrs Uribe concluded:  “Mindfulness is not a process or a tool to be used to produce certain type of individuals. It is part of developing one’s spirituality and should be embedded in a larger framework that is sustained by a values system; so it is not an isolated process but part of a spiritual one that can help children become more aware of themselves in relation to others; to uphold their human dignity and to hold each other as part of a common humanity, thus contributing to the positive transformation of our communities.”

Thanks go to the conference organizers and other presenters for organizing the event and inviting Arigatou International.