PRESS RELEASE: Launch of the Global Study “Faith and Children’s Rights:  A Multi-religious Study on the Convention on the Rights of the Child” 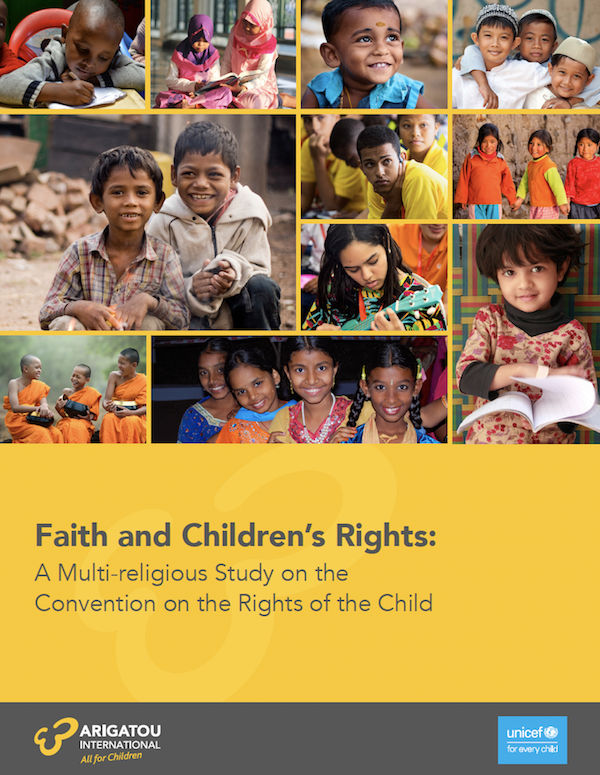 Arigatou International, in close collaboration with UNICEF, the former Special Representative of the UN Secretary-General on Violence against Children, the Global Network of Religions for Children (GNRC) and with the support of partners, the International Dialogue Center (KAICIID) and World Vision International, will launch the first ever global study on Faith and Children’s Rights to honor the 30th Anniversary of the Convention on the Rights of the Child (CRC), focusing particularly on the role of religious leaders and religious communities in promoting children’s rights and well-being and in preventing violence against children.

The study constitutes a valuable guidance for anyone who is committed to advancing the promotion of children’s rights: it provides a sound resource to support the efforts of religious leaders and religious communities to further expand their advocacy and action, mobilize new partners and engage even more deeply within their own faith communities to protect children from violence and promote their healthy development.

The study provides perspectives from seven religious traditions: the Bahá’í Faith, Buddhism, Christianity, Hinduism, Islam, Judaism and the Sikh Faith. In total, these traditions have more than 5.5 billion adherents around the globe.

The multi-religious study highlights the often significant role that the diverse communities of the world’s faith traditions have played in the preparation, adoption, ratification and implementation of the CRC over the past three decades.  It recognizes innovative work and good practices carried out every day to further children’s rights and contribute to child protection by religious groups as a means to carry out their mission.   It also contains new ideas for collaboration and recommendations for further actions by all stakeholders, including fostering interreligious dialogue as a way to facilitate the protection and promotion of children rights.

Religious leaders and faith-based organizations are in a unique position to champion children’s rights, asserting their moral authority to make a difference in children’s lives. They command extraordinary influence and often serve as role models of compassion, solidarity and justice. They help to bridge differences, foster dialogue, and influence positive social and behavioral change.

At the same time, around the globe today and throughout history, there are, and have been, harmful practices and actions among religious communities that are deeply inconsistent with both the fundamental values of the world’s major religions and children’s rights. No religious teaching or tradition condones or justifies any form of violence against children.

The far-reaching influence of religious leaders and faith-based organizations is especially important as we address sensitive social and cultural norms that deny children their rights.

This study creates a unique and compelling opportunity to put faith into action and promote interfaith collaboration to revitalize the implementation of the Convention on the Rights of the Child, inspiring positive change for children, everywhere and at all times.

The study will be launched at the United Nations on 19 November with a panel discussion featuring high religious leaders, the Deputy High Commissioner for Human Rights, the head of UNICEF Europe, the Committee on the Rights of the Child and representatives of the partner organizations. The panel will be followed by a Reception where children will officially hand over the study to religious leaders and provide recommendations to bring it into action in their communities.