From 14 to 16 September, the WCRP summer camp was held at Saitama in Japan. It provided a space for young people from different religions to deepen mutual understanding and trust between them through the exchange of ideas.A workshop based on the Learning to Live Together manual was conducted during the summer camp by Ms. Kumiko Shirai and Ms. Naoko Hara (Arigatou International staff), who were trained in the use of the manual during a workshop in Japan held at Myochikai premises in August. 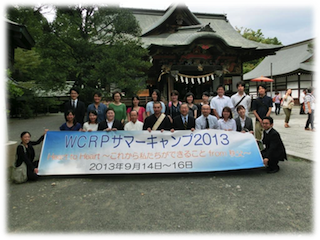 The themes of the workshop conducted during the WCRP summer camp were “Understanding that Indifference = Violence”, “Deepening understanding of the Millennium Development Goals (MDGs)” and “Reflecting on what one can do, as a religious person, for world peace and children”. A participatory program was prepared with the objective to engage the 21 participants physically and intellectually in learning about the MDGs and about violence.

During the workshop participants were asked through a case study to discuss how they would react if they heard a parent yell violently at his/her child. It is equally hard and sad for both sides, the abuser and the abused, and somewhere in their heart, they wish someone would stop them and be compassionate. Participants realized that the saddest part is when someone is ignored and doesn’t receive any help.

The main challenges of the workshop

There were some concerns before this workshop, mainly if the discussions among people of different beliefs would go smoothly, but everyone participated actively in the discussions and we were very glad to see participants spontaneously discussing how they should translate their thoughts into action. Participa

nts’ reactions were also encouraging as they asked for more similar opportunities to reflect together on other various themes. Next time, we should try to encourage more discussion and opinion sharing by setting up a situation to which participants can relate more easily. During the activities it was highlighted that it is difficult to put oneself in the other’s shoes; next time we will try to give more space for learning about it through role-playing or videos, for example, but without limiting the imagination of participants.

The main learning of the workshop

Through the workshop, many participants were able to put themselves in another’s shoes and consider things from other’s perspective. It seems that participants had vivid experiences when discussing things from the parents’ perspective. Without particular guidance from the facilitators, their discussions shifted from the common perception that “the parent is bad, the child is innocent”, to understanding the parent may be facing some problem or end up abusing because he/she feels lonely.  They starting to ask what they could do to help such parent and considering their role as religious persons.

The WCRP summer camp is an annual event and it is expected that the LTLT program become part of it every year. Some of the participants expressed their interest to have another opportunity to participate in an LTLT workshop. We would like to facilitate the world-spread dissemination of LTLT workshops and interreligious dialogues.

Most people embrace different religious traditions, such as Buddhism, Christianity, Shintoism, and so on. This multi-religious context is very appropriate and I wish we could provide more opportunities to introduce the LTLT, turn our eyes together to issues in society and the world that are hard to see and provide an occasion for people to develop empathy. LTLT does not only belong to Arigatou International. I hope that more and more people can learn to live together and share this feeling of happiness.

To read the full report of the workshop, please click here