Learning to Live Together used with 5th grade students in Athens

The teachers of the 5th grade students of the Elementary School of Intercultural Education of Paleo Faliro, Athens, Greece  used two activities from the Learning to Live Together manual to organize actions for the 6 MarchDay of Action against Bullying and School Violenceand the 21 MarchDay against Racial Discrimination. 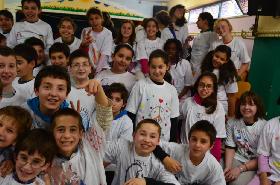 The Elementary School of Intercultural Education of Paleo Faliro, Athens, Greece has been using the Learning to Live Together within its curriculum for the last three years. The program is being implemented during the flexible hours. The flexible zone in Greek elementary schools is a specific period of time set aside within the school schedule (4hrs/week for the 1st-2nd graders, 3hrs/wk for the 3rd-4th and 2hrs/wk 5th-6th grades) wherein cross-thematic activities/projects are conducted. The teachers who wish to implement a project discuss it with the principal of the school and its choice depends on its usefulness, importance and interest for the students involved.

Students’ ethnic, cultural, linguistic and religious diversity in the particular school is in many cases the source of inter-group conflicts and hostility. The students come from about 30 different countries representing 4 different continents. For them Learning to Live Together has not just been another project but rather a practical necessity. Therefore, for the last years, students of 5th grade have been implementing the program during their two hours of their flexible zone.
During this month the specific students with their teacher used two of LTLT’s activities to organize actions for March 6th (Day of Action against Bullying and School Violence) and March 21st (Day against Racial Discrimination).

For the first focus the activity “Unjust situations” was used. Photos representing a variety of bullying and school violence situations were put on the wall and after participants had looked carefully at them, they sat in a circle and discussed the topic.  They were asked to talk about the picture that caught their attention the most explaining the reasons why, described what they thought the scenario behind it was and their  feelings when looking and contemplating about it.

The teachers used the images to speak about the different types of bullying, the consequences for the victims, the profiles of the bullies but focused mostly on the role of the bystanders. Following the suggestion in the manual “not to leave the students feeling helpless and powerless”, the session drew to its close with a discussion about the ways students can intervene when bulling incidents occur but also prevent them from happening in their own school community. The students realized the importance of changing their behavior from by-standing to standing by.

he second focus, the “Painting T-shirts” activity was used. One of the differences in this focus was that for celebrating the Day against Racial Discrimination the school invited a Greek neighboring elementary school to participate in the activity and the action. It was felt that the students need not only to Learn to Live Together within our school community but also in the community of the host country. At the same time Greek students must come in contact with children from different countries, get to know them and learn about them in order to combat possible stereotypes and prejudices that in several occasions result in ignorance. Therefore, another class of 5th graders came to the school and worked together with the students for two hours on the topic. After a short video and a discussion as an introduction to the theme,  the students formed 21 mixed pairs (one Greek with one foreigner student) and worked on the activity. Since the students are younger than the usual target group of the manual, 21 images on the topic of convivencia (peaceful coexistence) were used for the formation of the pairs. The images were cut in half and randomly handed to the students who had to find the other half. Afterwards the pictures were put on the wall were all students could see and get ideas for their drawings.

Following the instructions in the manual, the students were then asked to reflect about what they would like to put on their T-shirts as a message for the Day and to draft their designs on paper first. When they were satisfied with ther design, they reproduced them on their T-shirts.

Both schools were excited and happy with their joined action and arrangements were made for the Intercultural students to visit the Greek school within the next couple of weeks in order for the students to play together.