Masaa – Massar, an interfaith learning and peace building program based on theLearning to Live Togethermanual was held in Israel from 25 to 31 July 2009 for Christian, Jewish and Muslim Israeli youth.  The program aimed to provide the participants a chance to meet with one another and get more deeply in touch with their national and religious identity as well as get to know the other’s national and religious identity.Read more… 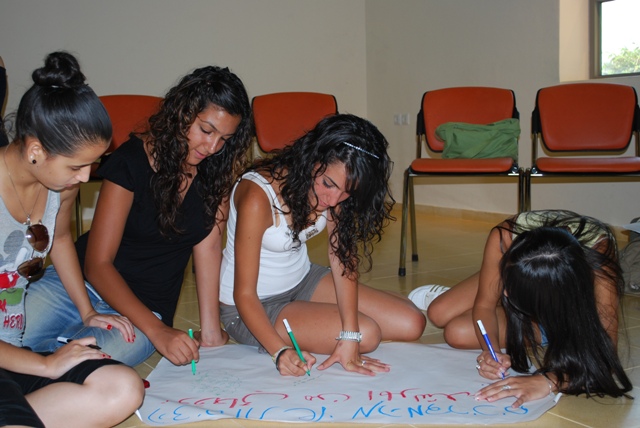 Masaa-Massar (The Journey in Arabic and Hebrew) was held successfuly in its consecutive third year, following some of the thematic kiosks, approach and methodologies of Learning to Live Together.  During one week, twenty youth, ages 15 to 17 from all over the country, gathered to explore their land, engage in deep discussions and challenged their stereotypes and views of one another.

The Journey started in Neve Shalom/Wahat al-Salam, a village jointly established by Jewish and Palestinian Arab citizens of Israel, that is engaged in educational work for peace, equality and understanding between the two peoples.  Walking through its streets, a Palestinian and a Jewish youth told the other participants the history of the village, its uniqueness, their principles, activities and programs.  After the visit, participants shared their expectations of the week and were introduced to the Learning Log, as a tool to register their experiences during the Journey.

In the evening they gathered around a campfire to share their views of the day, their experiences and connect to one another through games.  This activity helped them to reflect about their commonalities, their fears and prepare themselves for an exciting journey. 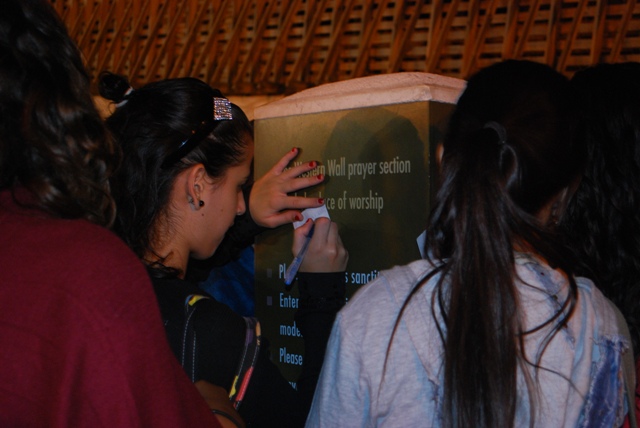 On the second day the group headed to Jerusalem to explore their different religious identities by visiting some of the holy sites of the three religions.  They visited the Dome of the Rock on the Temple Mount, learned about it and the Al-aqsa mosque.  Then they walked through the old city markets until they reached the Church of the Holy Sepulchre where they learned about Christianity.   In the evening they visited the Western Wall, the only survival remnant of what used to be the great Jewish temple.  Those who wanted went inside, wrote down a prayer and inserted it in the wall, as it is used in the Jewish tradition.  The interfaith visits helped them to put themselves in another’s shoes and encouraged them to try to understand the religious identity of the other.

This was definitely a challenging experience for all participants.  One of the Muslim youth who went to the Western Wall said:  “Never in my life did I expect myself to enter such a place…  I was afraid, I never expected to enter that place… Why was I afraid? Maybe because I am afraid of religious Jews and maybe because of the way they looked at me- an Arabian woman wearing the hijab, entering a place religious for Jews. When I was in the western wall I was nervous, Nervous from the looks of the Jews at me. Not a judgemental look but a questioning look- like I’m a stranger and what are you doing here? But I was happy that I tried something new in my life” 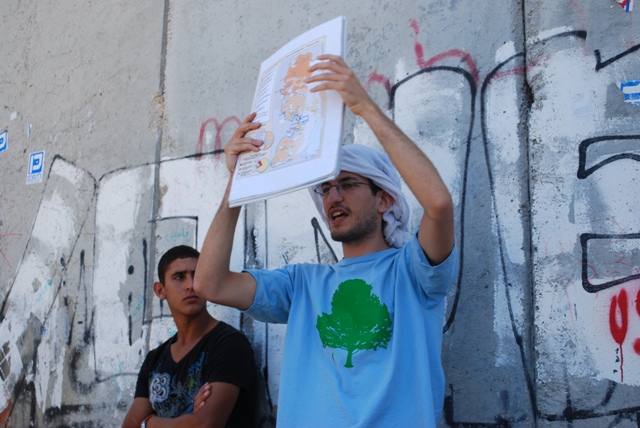 The next three days were dedicated to explore injustices in their conflicted land and listen to the different narratives and stories told by Jews and Palestinians. This part of the Journey took them to reflect about the conflict, the lack of mutual respect, the suffering of the other, the violation of human rights and to engage in deep discussions.

The encounter and the dialogue itself opened doors for them to think of a reality that they had paradoxically never seen or heard before, or to even talked about feelings, situations and controversial issues they rarely have the opportunity to discuss with the “other side”. For most of them it was the first time to be together for one week with people from a different cultural and religious background, or the first time they visited the religious place of the other, or heard the Palestinian painful stories of the “Nabka” (the catastrophe).

One of the participants commented: “The hardest thing for me today was listening to Saleem’s story, about how they demolished their house three times and how when they came they took him, his wife and his children out of the house, demolished it and left, as if nothing happened”. Another one said “I think that something changed in me. I didn’t really know Arabs before I came to this Masaa. I knew some, not children my age, but adults. Now that I do know them I realise that both of us like to laugh, talk and play. In general we are very similar and there is something that is bothering the connection between us Jews and Arabs in the country, and we have to find out what it is”

During these days they visited other places in East Jerusalem, the West Bank and Jaffa.  They travelled to the north to PKi’in where they had the opportunity to visit the Kibbutz “Lohmey HaGeta’ot”/Al Sumeria.  Each place, encounter and discussion challenged their understandings, ideas and perceptions.  The experiential activities were complemented by workshops run by Schools for Peace where the participants discussed the conflict through different angles: language, land and education.

The participants also prepared a cultural evening to learn more about the Arabic and Jewish cultures.  Through role plays they explained some of their traditional customs and learned more about each other.  Some of the participants of the previous journeys run some sessions in the evening to help the youth reflect on the importance of being empathic. 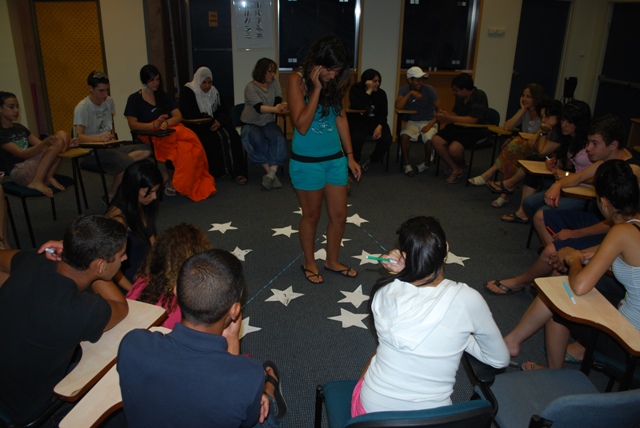 A very important component of the program are the introspection activities held.  Every evening the youth gathered in a sharing circle to talk about those experiences that were hard and what they enjoyed the most during the day.  This allowed them to listen to one another without prejudices and shared their insights of the Journey.   They also started each day with a morning meditation session prepared to find peace within and learn how to breath, which is a key aspect for managing anger in difficult situations.  These sessions were introduced to equip them with essential skills to move forward to respond peacefuly to different situations.

On the last day participants shared their learning and expressed their views of the program.  In the afternoon they went for ice skating, an activity designed to continue building bridges of trust among them and create bonds for future meetings.  Special thanks to Ms. Dorit Shippin, GNRC Coordinator for Israel, and Ms. Vivian Rabia, for organising and facilitating the Journey.

The program has been documented and followed during the last three years and now Arigatou International is developing a booklet of how the Masaa-Massar uses the Learning to Live Together manual.  The booklet will be published in the begining of next year as a best practice of how the manual is used in conflict areas.

The Masaa-Massar is a GNRC initiative in Israel that has been designed, planned and implemented jointly by the Pluralistic Spiritual Centre of Neve Shalom Wahat al-Salam and the Open House in Ramle.  You can read more about the initiative at http://www.arigatou.ch/en/council/activities/ethicseducationisrael.html and see more photos here