Learning to Live Together Introductory Workshop in Colombia

On the 7th of October, Arigatou International Geneva office together with GNRC Colombia carried out an introductory workshop with 37 members of the Peace Builders Movement. This workshop was held in the framework of the VI National Summit of the Peace Builders Movement, a participation process supported by World Vision Colombia, in which protagonists are children, adolescents, and youth leaders coming from vulnerable communities of 12 cities of the country.

The main purpose of the workshop was to introduce the educational approach of the Learning to Live Together (LTLT) programme to the members of the Movement, towards the possibility to start a systematic implementation of the ethics education programme with the more than 11.000 children participating in the promotion of a culture of peace in Colombia.

It was a one-day journey in which participants had the opportunity to explore the four values promoted by LTLT while joining the methodological framework of the programme. First, participants had the chance to reflect on who they are in relation to others. They reflected on differences and commonalities, realizing that there is always something we share in common despite our differences. While being blindfolded they experienced a moment of silence and meditation to reflect on how often we put ourselves in others’ shoes, and how emphatic we are towards others’ needs. The morning session ended with an introspective experience of self-discovery in relation to others. 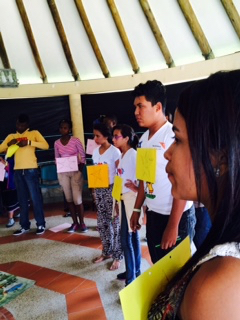 In the second half of the session, participants had the chance to start thinking as a collective group with the potential to transform the world together. By implementing the “diminishing islands” activity, participants were pushed to experience injustices. While noticing that the rules of the game were intentionally excluding or including people on a discriminatory basis; they started working together to counteract the impact of such actions. They critically analyzed how they reacted at the beginning: whether the situation could have been different; what was the alternative to reduce the impact of such injustices; and how ethical decisions have the power to drastically transform conflicts. Finally, they were introduced to reflect and acknowledge those actions in which they promoted reconciliation practices. They reflected on the importance and responsibility to act ethically while understanding that ethics is the way we interact with others knowing that everything we do affects others and everything they do affects us. Peace is built on the basis of who we are, what we do, and how we relate to others. The reason of the main goal of learning for the journey was to be aware that “I am because you are”.

Participants expressed their interest to incorporate the LTLT educational approach in their activities as a supplementary element that has the potential to strengthen the link between peacebuilding and ethics. 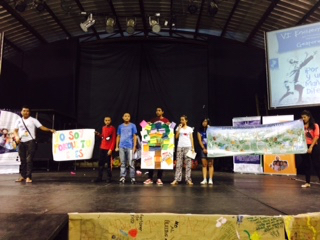 According to their feedback, participants were highly satisfied with the activities, the topics shared with them, as well as strongly encouraged to put in practice the lessons learned from the workshop. Although many of them became familiar with some of the topics and methodologies implemented, they considered that the LTLT programme is an added value to the work they do in their communities to empowerment of children and youth to be agents of change in areas highly affected by violence, poverty, corruption, and conflict.

While reflecting on Respect, Empathy, Responsibility and Reconciliation, participants identified and analyzed the relevance of making ethical decisions in a very complex context such as the Colombian one, in which the promotion of a culture of peace counteracts the impact of the strong culture of violence that the country is merging out of after more than 60 years of armed conflict.