Ms. Mercedes Román has been a key driving force in the implementation and dissemination of the Learning to Live Together Programme in Latin America and the Caribbean (LAC) since before it’s conception. She was part of the first group of experts, gathered by Arigatou International in 1998, to work on the launch of the Global Network of Religions for Children (GNRC), and has been working with Arigatou International ever since.

Ms. Román has dedicated her life-work to serve the most vulnerable in our society, and to promote the rights of the child, to contribute to their full and sound development. Nowadays, she is the Senior Advisor for the GNRC in LAC and is also part of the group of experts working in the adaptation of the Learning to Live Together Programme to middle childhood years.

In this interview, she shares about her journey working with children and women in vulnerable situations, and how her family and religious background instilled in her a strong sense of justice, generosity and caring for the most needed members of society. 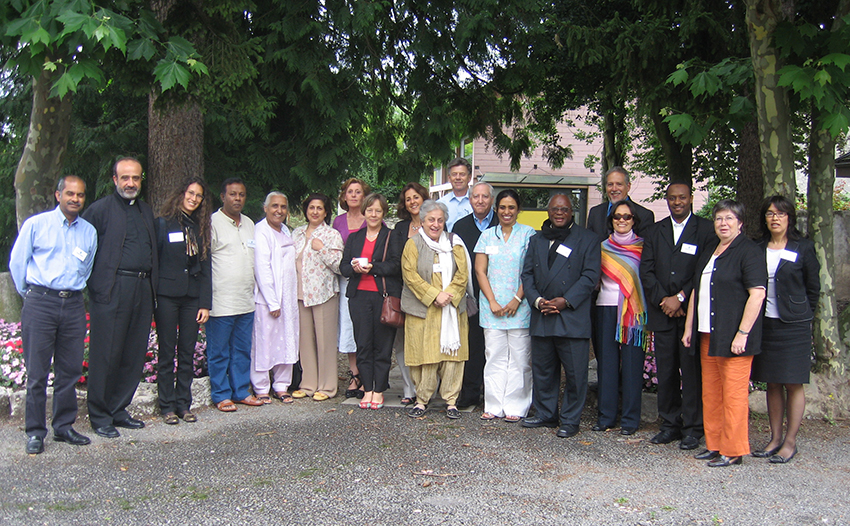 Ms. Mercedes Román, (fourth from right to left) together with other members of the first Interfaith Council on Ethics Education.

I was born in Ecuador and until I was 18 years old I lived in my hometown, Latacunga, a provincial capital very quiet by then, with very strong family and social relationships. I grew up in an extended family, with a lot of protection and a natural sense of caring for others. I am the oldest of 4 siblings, my father instilled a strong sense of justice, and my mother was an example of generosity. The person with the greatest influence in my childhood and adolescence was my maternal grandmother, a very devoted Catholic practitioner, caring and proud of her 33 grandchildren.

The Sisters of Charity in my Catholic school, when I was 8 years old, motivated us to participate in the Luisa de Marillac Congregation, whose mission was to assist the poor and the elderly. In addition to carrying out collects for the poor in the city, we had to visit an elderly person; mine was Eloisa, she was very poor and in a delicate state of health, and I still have memories of my visits to her in the hospital. This was a great lesson of life for me, I learned that caring for the most vulnerable goes beyond material help, and I experienced that helping the poorest and most needed made me happy. I was very young to understand poverty as a socio-structural problem, but this understanding was developed and that is how I decided to study Sociology. I also obtained a diploma in Anthropology and studied Philosophy for three years.

My calling to work for the socially most vulnerable was born in a Catholic context, and that core of religiosity and social concern always remained. I started working as a university student, and all my labor has maintained that core; my first job was with the Christian Family Movement, the second in Church and Society for Latin America, which was an ecumenical organization. Later and for 22 years, my husband and I were Maryknoll missionaries, a Catholic institution that emphasizes in its mission a preferential option for the poor. 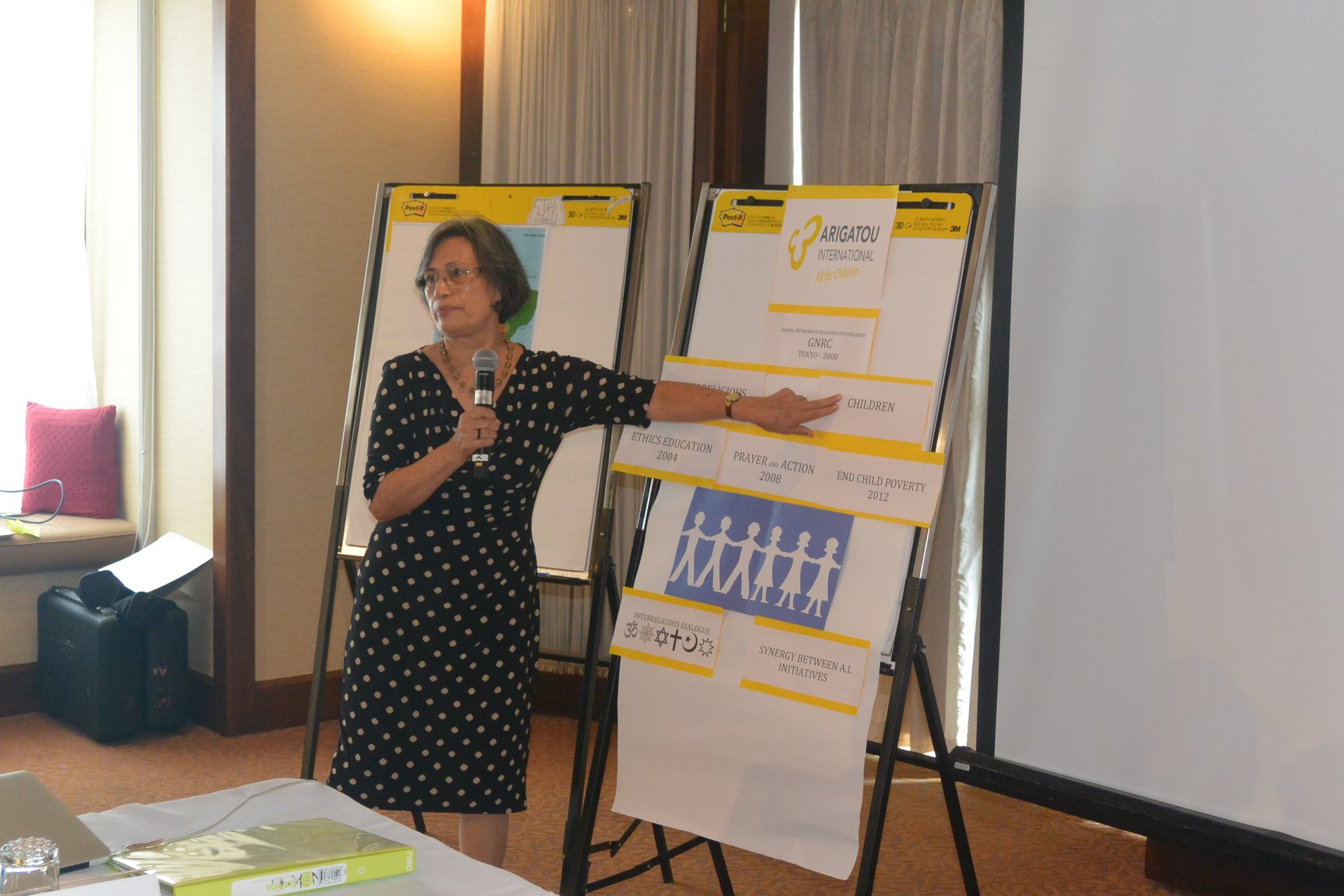 With Maryknoll, my first mission was with the Ecumenical Commission for Human Rights in Ecuador, on the rights of women from very poor neighborhoods. Some of them were illiterate, but for me, they were a “second university”. Working with them on the relationship between mothers and children, violence against children and children’s needs were unveiled for me as a social problem of great magnitude. After working for 6 years with poor and abused women, they were the ones who told me: “… we understood, and we see ourselves as people with rights, but somethings (it) may be too late for us, work for the children”, and I did. With a small donation and the collaboration of friends and people working for children, in 1987 we officially founded the Ecuadorian Section for the Defense for Children International (DCI). DCI-Ecuador was a pioneer in the investigation and reporting of the sexual abuse of children, a concern that was born in my work with women. My work for the rights of women was unfolded in the work for the rights of children.

I had the privilege of enrolling with DCI in the years of drafting, adoption, and promotion of the UN Convention on the Rights of the Child, and for this, I worked first from Ecuador and then from New York, as Permanent Representative of DCI in the UN and UNICEF. Later, I held the same representation for the Maryknoll Global Affairs Office. In the midst of these two representations I worked 3 years in Paraíba, Brazil with the Pastoral for Minors, also in the field of prevention of sexual abuse of children.

It was at the end of my term in Brazil, in 1998, when the Arigatou Foundation invited me to be part of the working committee to prepare for the launch of the GNRC, which took place in 2000 at its First Forum. This proposal of interreligious dialogue in favor of children at the global level was both very attractive and very challenging. The first certainty of the committee was to make explicit that the GNRC framework would be the Convention on the Rights of the Child. Once the GNRC was officially created, it was necessary to concretize its mission in programmatic proposals. This is how the Ethics Education initiative came about with an office in Geneva. In the Second Forum of the GNRC (2004) this initiative was officially launched, and after 4 years of work, in the Third Forum of the GNRC (2008) Learning to Live Together (LTLT) was launched, as a practical pedagogical tool to work on ethics education with children.

Until 2015 I was the GNRC Coordinator for LAC, and as such, I participated in the preparatory work of the LTLT manual. At the same time in LAC, the interreligious dialogue proposal of the GNRC in favor of children was set up at the country level through interreligious committees. From these committees, the implementation of LTLT has been possible, starting in 2005 with 4 pilot workshops (in Colombia, Ecuador, El Salvador, and Panama), prior to the edition of the Manual. Then came the most complicated task: the implementation that, as it is conceived in the Programme, begins with training workshops for people who work with children, both in formal and informal education. In LAC, around 32 training workshops have been delivered, to people working in informal education settings, teachers working in religious schools, and after-school programs for children from religious institutions. People from 16 countries participated in these workshops. Many of the activities suggested in the manual, and a good portion of how the training workshops are now structured emerged from the workshops at LAC. 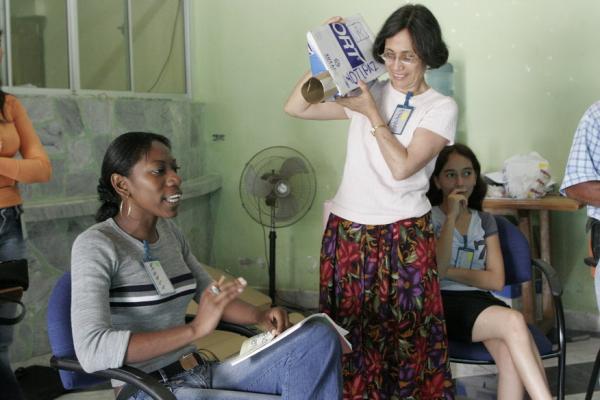 Ms. Mercedes Román at a Facilitator Training Workshop in Ecuador, in 2007.

The GNRC, as it is conceived, is a network that depends on the collaboration of other religious institutions, but what the GNRC has to offer is the Ethical Education program, with LTLT as a concrete instrument to work with children, which is an offer in demand. Like many, I think that global problems, violence in its various forms, starting with poverty and social inequality, and going through ecological destruction, are ethical problems. The economic resources worldwide are growing, but poverty, social and ecological violence are not resolved, due to a lack of ethics in the political work. Children are nourished by this violent and destructive culture, which is why it is urgent to introduce new ethical visions into their education, participating from an early age in actions based on ethical values, building a culture of peace, which is the proposal of LTLT.

The impact of socio-educational programs aims at personal changes of attitudes, which in itself is very difficult to measure; the changes of human visions are largely intangible, and concrete collective actions from the children themselves, as a result of new ethical attitudes, is only one measure. In addition, the training given can be deployed in unforeseen ways and actions that are impossible to monitor. Here, two examples of concrete cases of impact of LTLT, the two have to do with Ecuador but are intertwined with other countries in the region. The first case has monitoring possibilities, for the second we have only informal and casual information.

Maribel León, an Ecuadorian teacher, received LTLT training while working as a missionary in Guatemala. Back in her country, she has been implementing LTLT in the Catholic school where she works with teenage students. A concrete impact of her work is the commitment of the young adolescents that received LTLT, who work, in turn, with young children, within the values program of the School. This is a feasible case of monitoring and evaluation.

Ismenia Íñiguez, as a UNESCO-Ecuador official, collaborated and participated in one of the training workshops delivered in this country. Years later, UNESCO Peru hired her to prepare teaching support material on non-discrimination and culture of peace; and, later, for an educational innovation project in the District of San Marcos, a Quechua-speaking indigenous area of Peru. In a casual conversation, Ismenia reported that she used LTLT material and teacher training in San Marcos. She shared with me the material she wrote and Arigatou is credited there. This is an unpredictable impact at the time of the first training and was not subject to monitoring or evaluation. 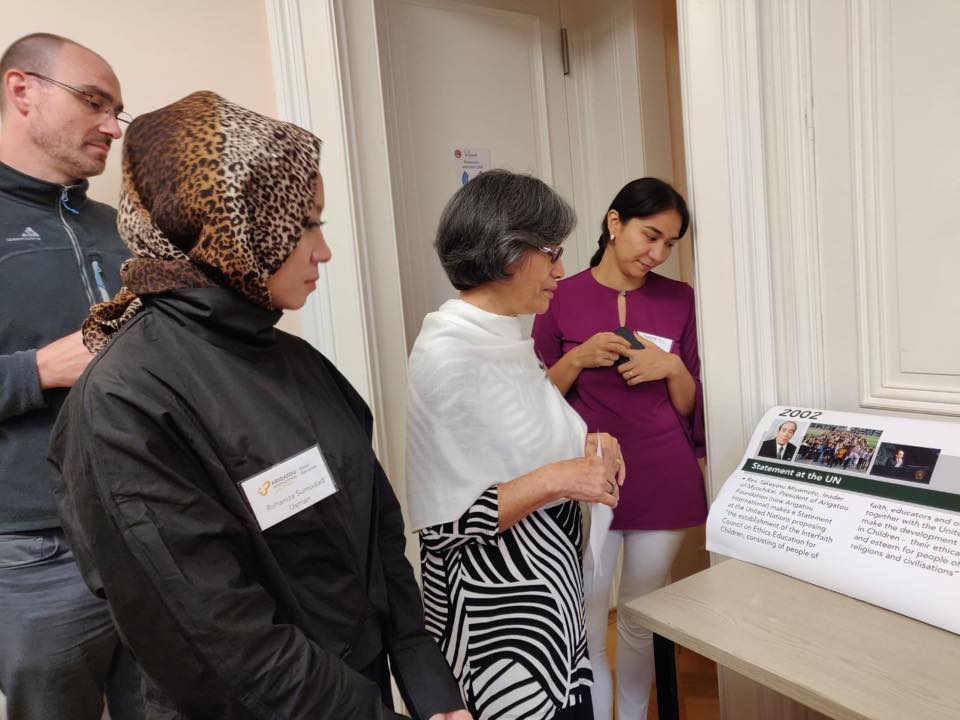 Ms. Mercedes Román at the Expert’s Meeting for the Adaptation of the Learning to Live Together Programme to Middle Years, in Switzerland, in 2018.

One obstacle to introducing LTLT in the public education system in LAC is the religious connotation on the cover of the manual; the phrase “an interreligious program” closes doors in the public schools of the region, which constitute the majority and the ones with more needs in the area of values. The public education authorities ensure the secular tradition of this sector with great zeal. Without changing the contents of LTLT, it would walk easier into all kinds of education if the interculturality and inter-religiosity of its proposal and contents were an explanation immerse in the introduction of the manual, as a tool for working with children that adapts to different contexts.

Among the religious institutions of LAC, the GNRC is known as the organization that implements Ethical Education and the Day of Prayer and Action, being the first where the greatest efforts have been made. In spite of this, in terms of impact, LTLT as a program confronts problems in the sustainability of its implementation, since there are no on-site human resources to support and monitor such implementation. Those who are trained leave the workshops very motivated but need more support in the implementation from their own institutions and from the program itself.

LTLT is designed for children between the ages of 12 to 18, but parents and educators perceive that nowadays children in these ages are already independent regarding the information that influences the formation of their values. Some educators have started on their own to adapt LTLT for younger children. Given this fact, the new efforts of the office in Geneva to offer materials for children from 6 to 12 years old within the conception of LTLT is very important.

We thank Ms. Román for conceding us this interview. Her life-long service is an inspiration to those working on building a more just and peaceful society for the wellbeing of children.