Learning to Live Together in Dominican Republic, a fulfilling experience for children and adults 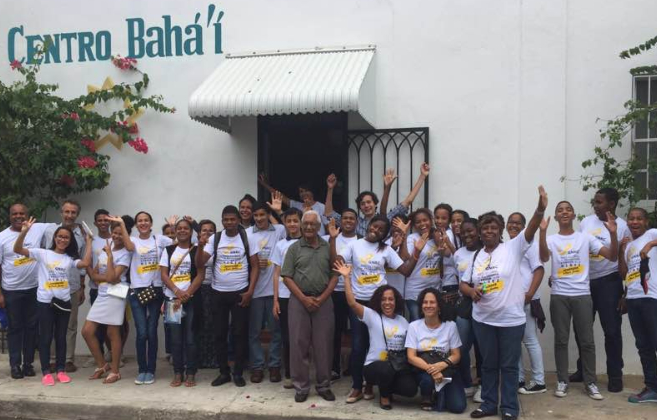 Since its successful implementation during the first semester of this year, Learning to Live Together (LTLT) Programme has benefited over 110 children, between the ages of 13 and 17, in Barahona and Santo Domingo, Dominican Republic.

After the Basic Training Workshop carried out in 2015 in Santo Domingo, five faith-based organizations, members of the Global Network of Religions for Children (GNRC), committed to implement an ethics education program based on LTLT and focused on the main challenges faced by their communities, such as violence, poverty and discrimination.

The five organizations involved in the implementation were: World Vision, the Church of Jesus Christ of Latter-Day Saints, “Fundación de Desarrollo y Progreso Educativo” a Bahá’í-based Educational Center, “Red de Educación Ética y Ciudadana” and the organization “Caminante Proyecto Educativo”. The Programme was systematically implemented from January to May 2016, inspiring children as well as facilitators to reflect on the importance of nurturing peace and respect for diversity.

One of the main challenges among Dominicans is overcoming social and ethnic discrimination, especially towards people of Haitian origin. In consequence, an important achievement of the implementation was nurturing in children and youth the capacity to empathize towards people from different backgrounds and to promote mutual understanding, as reported by Ms. Carmen Julia Gómez, Monitoring and Evaluation coordinator and in charge of the follow-up of the implementation of the LTLT in Dominican Republic.

“Before the program, when facing racism and bullying, kids tended to choose physical and verbal confrontation as a solution. Now they identify other alternatives such as dialogue and seeking help from teachers”, stated Ms. Gómez.

The implementation of LTLT also motivated the participants to reflect about the importance of respecting people of other faiths. The organizers decided to conclude the program with an “inter-religious tour”, where children and youth from the five participating organizations had the opportunity to visit several Christian churches, including Adventist, Catholic, and Evangelical as well as a Hindu and a Mormon places of worship. The activity was very much welcomed among children as well as facilitators, who also reported more empathy towards people of different faiths.

“I am sure we all learned. The program contributed to reflect on how to build an environment of harmony and to practice forgiveness. As facilitator, I feel I am the one who has benefited the most. I understand better other people, my family and especially my daughters”, stated Ms. Mercedes Peña, one of the facilitators from Iglesia de los Santos Últimos Días, in Santo Domingo.

Following the LTLT Basic Training Workshop in 2015, the facilitators from the five participating organizations created a Community of Practice which was conceived as space for them to develop their skills, exchange knowledge and experiences with the implementation, identify successes and opportunities for improvement, and enhance their experiences with intercultural and interfaith dialogue. The Community of Practice, led by Ms. Gómez, contributed to enrich the work of each organization and allowed facilitators to work collaboratively.

After their successful stories of implementation, our sincere appreciation goes to GNRC Dominican Republican, and all the facilitators and their institutions for their constant enthusiasm and commitment, to the leaders of each organization for their support, and to Ms. Carmen Julia Gómez for her engagement and dedication over these months.