Interview with Monsignor Julio Garcia, Bishop of the Diocesis of Istmina – Tadó, Colombia 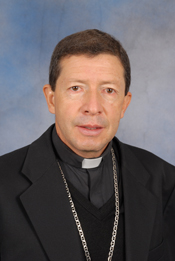 A workshop on the Learning to Live Together manual was organized from 26 to 30 June 2013, in the Centre San Antonio of the city of Tadó, in Colombia. The workshop was titled “Building cultures of peace in the family and facing the ethical challenges of children living in extreme poverty”.

What motivated the Diocese of Istmina-Tadó to develop a workshop on ethics education in collaboration with the GNRC?

In the Diocese of Istmina, Chocó, located in the west of Colombia, in the middle of flowing rivers, leafy forests and rich mineral soils, there is an increasing number of children, teenagers and young people seriously threatened by risk factors such as the recruitment of minors into armed groups operating in the region, alcohol consumption, prostitution of teenagers and youth, and the temptation of becoming part of a drug-trafficking network. In addition to this, there is a severe problem of domestic violence that leaves profound footprints in the children and youth. For all these reasons, we decided to undertake, in cooperation with other organizations, the planning, organization, execution and transformation of an important group of persons from a neighbourhood very affected by all these problems, the neighbourhood of San Agustin in Istmina.

We strongly believe that this is a population full of values and great opportunities. As Church, united in a network with other foundations, we wanted to impact children, teenagers and youth, generating processes that would make them the protagonists of their own story in a creative way. This is the reason why we decided to nurture values to encourage a cultural change.

What are the main results of the workshop? How do children and youth benefit from these initiatives?

One of the most interesting results of the workshop was the fact that participants were able to comprehend the reality of their neighbourhood and, from a reflection about this, they made concrete commitments to generate an impact on other peopel, groups and the neighbourhood. They committed themselves to become real agents of change allowing them to feel with hope that, even though we are sinners, we still have the opportunity of grace.

What kind of activities inspired in the manual have you envisaged to continue nurturing ethics values in children and youth?

We have the intention of continuing having weekly meetings in the neighbourhood of San Agustin of Istmina to strengthen the group of persons that participated in the workshop. The objective is to continue deepening the different thematic areas proposed in the manual.

The review and debriefing meetings are held weekly. To these activities, we also need to add the continued efforts that are being made by the group of participants to plan and construct a park in the neighbourhood, and the organization of a clean-up campaign that has been remarkable. The idea consists of refraining from throwing garbage in the streets and, instead, transforming them into Ecobricks that will be utilized in the construction of the park.

Finally, we can also tell you about the work that is being done on the development of two big projects: the first one is the restoration of a communal sport court badly damaged requiring a collective work for the benefit of the community; and the second initiative is the creation of a music band with the participation of a large group of children and youth of the neighbourhood.

Given the challenges of violence and poverty the region is facing and the current peace process, how do you see the use of the Learning to Live Together manual for the development of reconciliation processes in the region and the empowerment of the community?

To face the current social problems affecting the region of Chocó, I think it is extremely important to have the backing of persons able to engage in a deep reflection about those problems and to bring light to the everyday events.

The so long-awaited and desired peace by the Colombian people for more than 60 years, seems to remain a chimera, but we think that by strengthening educational processes we can dream of a future in which the fratricidal war will be definitely over, and children and youth of our nation will enjoy the gift of peace.

In the same workshop, we noticed that some youth were already prisoners of the spiral of violence but they have been able through the workshop to make a choice of non-violence.

Colombia is currently in a complicated process of negotiations in La Habana, Cuba. We don’t know what are going to be the outcomes. However, we feel the urgency of working to achieve peace in order to stop this devastating disease that is leaving children without parents, without home and without a community.

Participants in the workshop committed to not carry weapons, to not generate violence and not littering or throwing garbage in the streets and rivers.

In my opinion, the use of the Learning to Live Together manual has been very important because it has raised in this group of individuals a renewed desire of being and sharing with others, including elements of religious reflection. In this vein, it has generated a great impact on the personal and virtual dialogues and meetings, held with religious leaders of other churches working in Istmina.

I consider that this is one of the most positive aspects of the acceptance of others, tolerance of differences, and respect to others’ choices.

The experience has been very important from all points of view. I hope it will be strengthened and other possibilities for exchange will emerge, planning joint actions and developing activities to encourage an experience of universal brotherhood between all persons.

We have high hopes on this project that is being implemented thanks to ARIGATOU INTERNATIONAL and we expect the best results.