Pax Romana and UNESCO-Etxea organized a Seminar to discuss interreligious dialogue, its current situation and future challenges.  The Seminar was carried out on 17 October in Bilbao in the Basque countries. The day finished in the afternoon with a conference by the Swedish Rev. Hans Ucko, Secretary of the Program for Interreligious Dialogue of the World Council for Churches, and his wife Agneta, Director of the Arigatou Foundation and General Secretary of the Interfaith Council on Ethics Education for Children.

Hans Ucko appealed for an alliance among all world religions.  Although religions, in some places, are the root of certain conflicts, we will have to get the best out of the religious plurality.  Ucko says: “even though the interfaith dialogue is not something new, what is new is that what happens in one part of the world affects another part through the globalization and the media.  Relations between Christians and Muslims in Asia will have a repercussion in Europe .  Religions can become a tool for peace or a gun in a conflict.  Ucko explained the case of Sierra Leone, where the Muslim and Christian leaders met to approach the political crisis that threatened the existence of the country, two years ago. 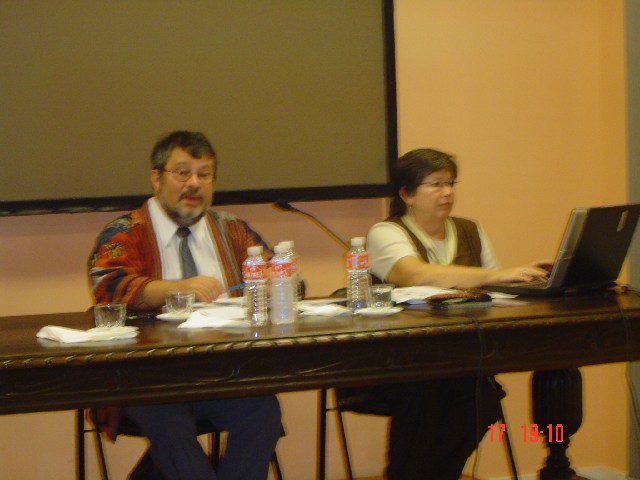 Hans Ucko said:  “Now more than before, religious leaders need to join efforts to approach ethical and moral issues together.  Societies are aware of the need for capitalizing the resources religions have, taking into consideration that religion more than any other phenomenon in society can reach everybody as no other element”.

Agneta Ucko, Director of Arigatou Foundation, introduced the interfaith network GNRC that has recently established the Interfaith Council on Ethics Education for Children. She spoke about interfaith dialogue as a way to promote interfaith learning and ethics education for the well being of children.  “In the year 2002 the Arigatou Foundation invited 350 people from different religions and countries, who work with children and the Global Network of Religions for Children was launched.  Religious leaders of different faith communities have influence and if we can convince them to speak for the rights of children and promote value based education, there might be a possibility for change in the situation for the world’s children today”.

The seminar served as an introduction to the International Congress on Intercultural and Interreligious Dialogue, called: “New Challenges in a World that Yearn for Peace”.  This will happen from 11 to 13 of December in Bilbao , the Basque countries in .  For further information about the Congress, please visit  the website www.icii-bilbao.org