Implementation of the manual “Learning to Live Together” with mothers in Porto Alegre, Brazil

GNRC Porto Alegre initiated a project with communities assisted byPastoral da Criançain Brazil to use the Learning to Live Together manual with mothers.  The purpose is to nurture positive parenting skills and strengthen mothers' self-esteem and bonds with their children. 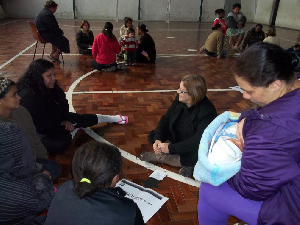 Their first program led by Tiago, one of the GNRC Youth, was based on the first module of the Learning to Live Together manual – Understanding Self and Others. Tiago and his team worked with 90 children and 25 mothers, many of whom are young and single mothers, to learn from one another, share their stories, experiences, beliefs, and challenge their stereotypes and prejudices. Together they discussed about their role as mothers but also as individual members of a society. This is the first of many other activities that will be conducted during the year to promote positive parenting.

During this workshop, activities were created using the manual to allow mothers and children to reflect on the concept of prejudice, the problems of daily life such as drug trafficking and violence in general. The modules and workshops were adapted so as to fit the age of children but also the level of literacy of mothers.

The five groups of mothers worked initially on the concept of prejudice, discussing concrete examples of social situations to illustrate the idea. They explained how important it is that children grow without prejudices about race, religion, sexual orientation, social status, disabilities, aging, etc.

During the activities, mothers raised questions related to drug trafficking and violence and other situations of their daily life and reflected about their roles as mothers but also as members of a community.  It was an important exercise to bring the mothers together, to create dialogue among them and awareness about the important role they have to support their children to nurture their spirituality and possibilities to thrive and fully develop.

“Mothers love their children, though they treat them exactly in the same way they treat themselves.  If mothers don’t take care of themselves, do not clean themselves or do not have higher aspirations in life, this is exactly how they would treat their children.  Unfortunately, in poor communities mothers are preoccupied about today but not about the future.”