Growing up with GNRC and the Learning to Live Together 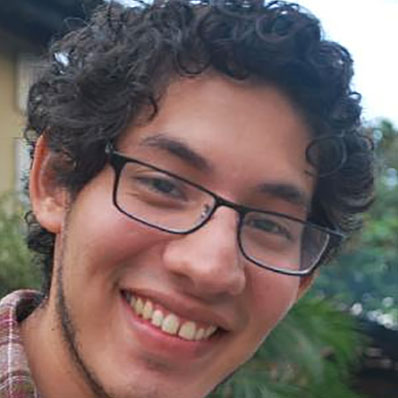 This time Voices of children and youth features Matias Alejandro Flores Mejía from El Salvador. He talks about his experience with the GNRC in El Salvador with the Learning to Live Together Programme and how it helped him grow and understand more about himself.

I got to know the work of GNRC 12 years ago. I think this is the right time for me because it opened doors to a new world. Let me tell you a short story about how the life of a small boy set the course to grow up with the GNRC.

I was only 12 years old when I was first selected to participate in a workshop of GNRC. I have to confess that this being the first time I had no idea what I was doing there, and I think I was one of the youngest ones at the workshop. In that moment I did not know the magnitude or the significance of participating in such an event.

It was the first workshop of GNRC in El Salvador and I remember the facilitators talking about Learning to Live Together. I don’t remember very well the themes, mainly because my expectations were on the wonderful games that I still vividly remember; Maria Lucia and her “Asisi Sisi Manga” and other games that I later taught to all my friends when I returned home.

The impressions left by the workshop were many but mainly having met other people who were Buddhist, Jewish, Muslims, and from other religions that were so different from the ones I knew. What amazed me even more was how I was interacting with unknown people with different customs and thoughts but at the same time it felt like home.

After the workshop came to a close, I asked my church that I would like to be included in any and all the events that GNRC organizes. Since then I have been able to attend many events. With each passing event I was able to learn things that were not taught in school and best of all the games were always present.

With time I grew up, and from a small 12-year-old boy, I became an adolescent. During this time Ethics Education and Learning to Live together had a different meaning for me. I understood that it wasn’t only the games that were interesting but also the lessons behind each of them. Through learning about the realities of other adolescents and sharing my own experiences, my concern and hope began to build up inside of me, allowing me to see that bad things do not have to be that way and that we can change at least one part around us. An innocent thought, however deep and filled with hope, that I have no doubt my friends also shared, as I could note it in them.

As time passed and I became a young adult. I remember when the GNRC committee first asked me to be part of it. I went from participating in the activities to now organizing them. This is when I realized that the real challenge was about to start, but yet I took it with enthusiasm. I learned from the teachers I looked up and I became a part of a process where I was creating possibilities to change the lives of other children.

Fifteen years have passed, and all the things that I learned in the past, I am now able to share them with others. Learning to Live Together is not just a guide or a manual with strategies for living together, but it’s more of a style of life that is part of people’s lives in the greater parts of the world.

One time I was asked, “What do enjoy the most, having participated in the workshops or facilitating a workshop for other children and young people?” My answer was simple: “I have never ceased to enjoy”.

With time I have realized that the world would not change and that everything is part of a balance. Nonetheless, I discovered that changing people’s lives, especially children, is possible and it can be done simply by replicating what I learned throughout my experiences.

I always thought that destiny would not be able to happen on it’s own, and what is needed is an opportunity to realize our dreams. Albert Einstein’s “Only a life lived for others is worth living,” is a great example of how I have been able to spend my life.

What awaits GNRC-El Salvador and the rest of the world is a challenge, one that I am eagerly awaiting to live.