About 500 children from various schools in the city ofDar es Salaam,Tanzaniaparticipated in this year’s fete in which the International Day of Peace was marked around the world. The children and young persons from the GNRC Peace Clubs had earlier made 50 ‘Kites for Peace’ which were flown at the seasideCocoBeacharea in the afternoon of the UN peace day on 21 September after games on peace conducted by the Right to Play coaches.

The Global Network of Religions for Children joined the United Nations to mark the International Day of Peace on in . Close to 500 children drawn from the GNRC Peace Clubs, schools in and the Dogodogo Centre participated in this year’s fete whose theme was ‘Let Peace Begin with Me’. 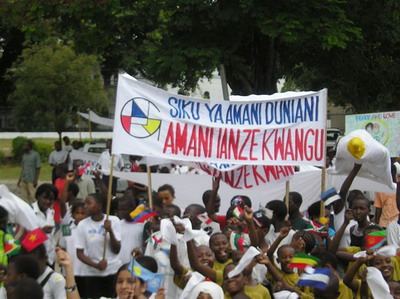 The children and young persons started with a peaceful procession through the streets of the city of from the United Nations offices, and ended at the Karimjee Hall where the event was held.

The United Nations Secretary General message was read by the UNESCO Resident Representative Mr. Sy Cheikh. In it, Kofi Annan lamented that there were still widespread conflicts around the world.

The outgoing UN Secretary General stated that ‘… for far too many people today, those gifts [of peace] are only an elusive dream. They live in chains: a climate of insecurity and fear. It is mainly for them that this day exists’, Mr. Annan said in his speech.

The guest of honour, Foreign Affairs Assistant Minister Ambassador Seif Ali Iddi delivered his speech stating that the Government of Tanzania was committed to the core values of peace and security.

Ambassador Iddi said that there was need to strengthen the system of collective security to meet the tasks and needs of the 21st Century. ‘Greater international solidarity in tackling global problems caused by war and conflict’ was required, Iddi sated.

There was a statement by the Tanzania Peace Network which called on the international community to mind the plight of the young people especially in conflict areas. Ambassador Iddi then led the guests to the ‘’ where ‘peace trees’ were planted.

Joining the Peace Clubs to fly the ‘Kites for Peace’ was the British High Commissioner to Mr. Philip Parham, and the Belgian Ambassador to Mr. Peter Maddens and their families.

The International Day of Peace is marked every year on 21 September. It was designated by the General Assembly in a resolution when it was decided that the day would be observed as a day of global ceasefire and non-violence, and invitation to all nations and people to honour a cessation of hostilities during the day.

In 2001, the UN body reaffirmed its commitment to Peace and passed the following resolution. “The Assembly, reaffirming the contribution that the observance and celebration of the International Day of Peace make in strengthening the ideals of peace and alleviating tensions and causes of conflict, (decided that) beginning with the fifty-seventh session, the Day should be observed on 21 September each year, with this date to be brought to the attention of all people for the celebration and observance of peace.” 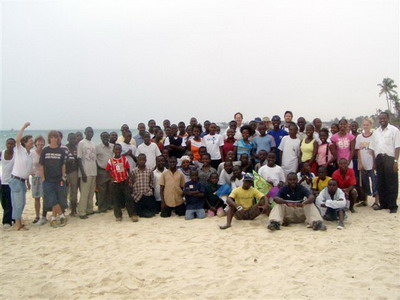