Family as a Unit of Harmony and Peace – The Hindu Perspective 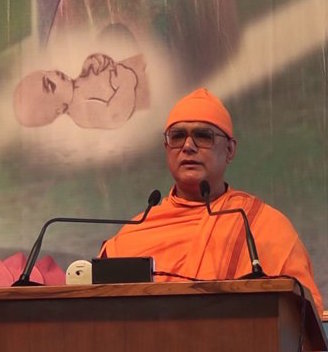 Hinduism is a very ancient religion believed to be thousands of years old. It has no particular founder nor it is dependent upon any specific book. It is as mysteriously complex on the one hand and as simple as the rays of the sun on the other hand. Tracing its origin is as impossible as tracing the origin of God Himself! It is ‘vast as the skies and deep as the ocean’ with an amazingly rich variety of traditions. These appear bewildering at first sight, but on reverential investigation reveal their fascinating multifarious hues, rich patterns and wonderful generalizations based on universal principles. Hindu religion is therefore called in Sanskrit Sanatana Dharma, the Eternal Religion.

Dharma, although translated often as ‘religion’, is much more than that—it is that Principle that ‘holds’ us all together—the living and the non-living, men, women, animals, plants, sun, moons, stars, galaxies, in fact the entire universe of micro- and macro-worlds. In modern parlance, it could be called the ‘Principle of Sustainability’. Two kinds of dharma are spoken of as the Vedic Dharma, that is, delineated in the Vedas, the fundamental scriptures of the Hindu religion: one, pravritti dharma and two, nivritti dharma, that is, all-round welfare while living on the earth and emancipation or freedom beyond living. The first one is again classified into three components: dharma, artha, kama¸ that is, universal goodness, wealth, enjoyment of desires. The second one is the single thrust of moksha, that is, emancipation or freedom from all bondage, all limitations, all forms of egocentricity.

The Hindu sages were called rishis, the spiritual scientists who investigated relentlessly and one-pointedly into the inner world of the Spirit as contradistinguished with the material scientists who investigate into the outer world of matter. The documentary evidence they produced of their discoveries, which is an open-ended document as it were, is called the Vedas. Swami Vivekananda pointed out in his famous paper presented at the World Parliament of Religions in Chicago in 1893 that by Vedas no books were meant, but they were the treasury of spiritual laws discovered by the rishis. Elaborating on this, Sister Nivedita, one of the outstanding exponents of Swami Vivekananda’s thoughts and his chiefmost woman disciple, writes:

“To him, all that is true is Veda. ‘By the Vedas,’ he says, ‘no books are meant. They mean the accumulated treasury of spiritual laws discovered by different persons in different times.’ Incidentally, he discloses his conception of the Sanatana Dharma. ‘From the high spiritual flights of the Vedanta philosophy, of which the latest discoveries of science seem like echoes, to the lowest ideas of idolatry with its multifarious mythology, the agnosticism of the Buddhists, and the atheism of the Jains, each and all have a place in the Hindu’s religion.’ To his mind, there could be no sect, no school, no sincere religious experience of the Indian people–however like an aberration it might seem to the individual–that might rightly be excluded from the embrace of Hinduism. And of this Indian Mother-Church, according to him, the distinctive doctrine is that of the Ishta Devata, the right of each soul to choose its own path, and to seek God in its own way. No army, then, carries the banner of so wide an Empire as that of Hinduism, thus defined. For as her spiritual goal is the finding of God, even so is her spiritual rule the perfect freedom of every soul to be itself.”

The whole life of an individual human being has been perfectly ordered in Hinduism into four stages called ashramas: the student stage (brahmacharya ashrama), the householder stage (grihastha ashrama), the retired mendicant stage (vanaprastha ashrama) and all-renouncing monk stage (sannyasa ashrama). These four stages came to be reduced later into just the first and the last two stages: the householder stage and the monk stage. Each of these is equally glorious; what is important is to aspire to become an ideal householder if a person is in that stage, or an ideal monk, if one belongs to that stage.

In our present discussion we would restrict ourselves to the life of an ideal householder who is the head of a family and how, under his headship, the whole family becomes a unit of universal harmony, peace and joy.

Ideal of a Householder as the Head of a Family

Of the two prominent stages of life, called ashrama in Hinduism, that of a householder (grihastha ashrama) is considered the oldest and the most important (jyestha and shreshtha), inasmuch as all the other ashramas depend upon it. Hence, the householder, with his family set up, is largely responsible for maintaining peace in society. The harmony and peace of his household reflects upon and profoundly influences the wellbeing, joy and peace of the society as a whole. Now, there are three fundamental principles on which this peace and harmony rest:

The Hindu sacred texts, the fundamental scriptures, Upanishads and the Bhagavat-Gita, speak of yajna, dana and tapas (sacrifice, service and penance) as the triad of core virtues or values that must be adhered to any cost. Swami Vivekananda, the modern exponent of Hinduism and the Prophet of Harmony and Synthesis in modern times, said: “The two great national ideas of India are renunciation and service. Intensify them in these channels and the rest will take care of itself.” Here renunciation refers to yanja or sacrifice, service is dana or seva and intensification means tapas.

Among these three Principles above mentioned, yajna occupies a prominent place in the daily life of a family. In fact, Hinduism looks upon the whole of creation as a Cosmic Sacrifice (virat yajna) through which the Infinite Supreme Being sacrificed Himself to become the entire manifested universe of beings, living and non-living. The individual life of a Hindu, therefore, is a joyous participation in the Cosmic Sacrifice which enables the Hindu to live his/her life in perfect harmony and in tune with the Infinite. This resonance, the individual life vibrating in unison with the Cosmic Life, is the secret of harmony and peace at the individual as well as the collective level, at the family level as well as the societal life in the universe. This Universal Resonance is called in the Hindu scriptures, particularly the Upanishads, as Ritam Brihat, the Cosmic Rhythm of Existence.

These five-fold sacrifices are mandatory for any householder in family life and these establish unbroken connect between his/her individual life and the Cosmic Life and Universal Existence.

Shanti mantras or Peace Chants, compulsorily to be recited at the beginning and end of a Vedic or Upanishadic passage, are a constant reminder that Peace and Harmony prevail always and unbroken in the Universe. It is the sacred duty of a Hindu, a person of God Consciousness, living a cosmo-centric life rather than an ego-centric existence, to constantly aspire to keep this current of harmony, peace, joy and love flowing unbroken and perennially.

Such a life, lived in tune with the Infinite, lived in unbroken communion with the Cosmic Life, lived in constant ‘dynamic equilibrium’ with the Universal Consciousness, is the only life worth living. And this is the ideal Hindu way of life. As Swami Vivekananda said, the only remedy to miseries of the world is the transformation of man’s character, which means living a cosmo-centric life, in tune with the Infinite, Universal Reality. We end by quoting his famous words:

“The only solution of this problem [of misery] is to make mankind pure. Ignorance is the mother of all the evil and all the misery we see. Let men have light, let them be pure and spiritually strong and educated, then alone will misery cease in the world, not before. We may convert every house in the country into a charity asylum, we may fill the land with hospitals, but the misery of man will still continue to exist until man’s character changes.”

And the voice of Hinduism calls upon humankind to awaken to this task of transformation of man’s character to make him vibrate in unison with the Cosmic Rhythm. Now that man is panic-stricken, strife-torn, conflict-ridden, he would do well to listen to this call arising spontaneously in the Cosmos as the Music of the Spheres and welling up within the human heart as a perennial current of universal love and harmony!