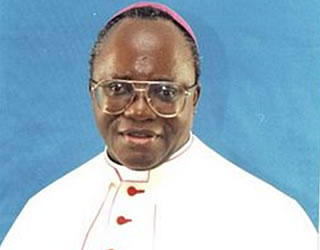 Bishop Kilaini obtained his MA in Theology from Urban University and his Doctorate in Church History from the Gregorian University in Rome. He was the Secretary General of the Tanzania Catholic Church for 10 years. He is active in social and interreligious organizations like the Global Network of Religions for Children, Amnesty International, World Conference of Religions for Peace and he is the founder of Tanzania Ecumenical Dialogue Group.

In the Catholic tradition the family is the basic unit of the church and it is there that any organization of the church starts. The family has great importance and for that reason it is formed by a very solemn covenant of marriage in the church. The Catechism of the Church which defines the official Catholic teaching defines thus this covenant: “The matrimonial covenant, by which a man and a woman establish between themselves a partnership of the whole of life, is by its nature ordered toward the good of the spouses and the procreation and education of offspring.”[1]

Marriage in the Catholic Tradition has two aims, the first is for the good and fulfillment of the couple that freely enter the life contract and the second is to put up good ambient for the begetting and sound upbringing and education of the children. Both are necessary for a Catholic marriage.

The Catholic church and Christianity in general believe that the institute of marriage is not a human creation but a Divine command put in the nature of creation itself as expressed in the Holy Scriptures, the Bible which is believed to be the word of God: “And God created man to his own image: to the image of God he created him: male and female he created them. And God blessed them, saying: Increase and multiply, and fill the earth, and subdue it,.. (Gen. 1:27-28). In the same bible this is the command of Jesus Christ the founder of Christianity: “a man shall leave father and mother, and shall cleave to his wife, and the two shall be one flesh. Therefore now they are not two, but one flesh. What therefore God hath joined together, let no man put asunder” (Mt. 19:4-6). Thus the basic principles of marriage and family cannot be changed by man.

The spiritual values of a Catholic marriage emanate from their free decision that they are together for life, come what may. Marriage is indissoluble. Christ commands “Whoever divorces his wife and marries another, commits adultery against her; and if she divorces her husband and marries another, she commits adultery” (Mk 10:11-12) They are called to grow continually in their communion through day-to-day fidelity to their marriage promise of total mutual self-giving[2]. The fulfillment of conjugal love is having children and introducing them to life. Parents are the principal and first educators of their children.[3] The parents educate their children mostly by their example of a life of love and mutual respect.

The African traditions add to the richness of the Catholic family. The African family is bigger than the father, mother and children. A clan is an extended family including all the near relatives. A person lived in the clan all important moments of life like birth, marriage and death. A family was strengthened by the security of the clan which protected the rights of each member including children and resolved the conflicts and crisis in the families. The clan planned together the education of their children and their morality.[4]

The Catholic Church in Eastern Africa and particularly in Tanzania has formed Small Christian Communities of 12 to 20 neighboring families in the module of a clan. These live together their faith and support each other both as families and in education of their children. It is in these Catholic clans that they try to solve many problems of the families and education of children. The families no longer live in isolation and this is very useful especially in towns and cities. Through the Small Christian Communities the families bring their children together, give a common life education and this helps the children to educate each other in doing good. These families educate children through songs, plays and stories.

The Catholic Teaching of the Church and the Traditional African clan system have merged well to create a way of strengthening the families and the education of children.