Ending Violence in Early Childhood – The Role of Religious Communities 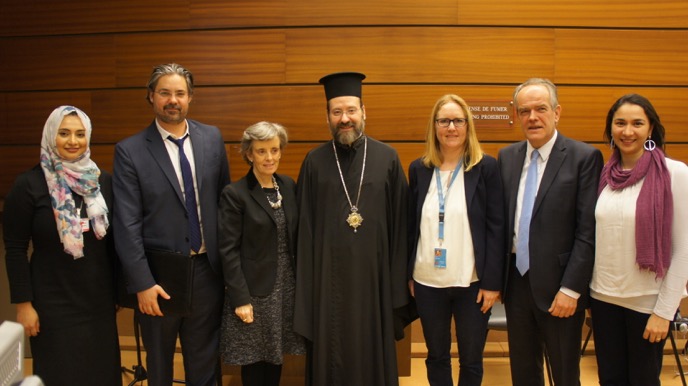 Around 65 participants, including representatives of the Permanent Missions in Geneva and civil society organizations, engaged in reflections about the impact of violence on early childhood and the need and importance of addressing its causes; looking at how religious communities could help challenging social and cultural norms that justify violence in child bringing. The panelists shared good practices from the Eastern Orthodox Church and examples of the leadership of H.E the Ecumenical Patriarch Bartholomew; as well as practical examples from Islamic Relief and UNICEF collaborations with faith-based organizations in different parts of the world. The need to increase investment and ensure the inclusion of religious communities and faith based actors in programs and in collaborations with government actors were also discussed. It was emphasized the need to continue prioritizing laws to ban corporal punishment and provide interventions that look holistically to early childhood development.

The side-event was moderated by Mrs. Frédérique Seidel, Special Advisor on Child Rights from the World Council of Churches, who welcomed participants and explained the objectives of the panel. Mrs. Marta Santos Pais, Special Representative of the Secretary General on Violence Against Children, delivered her key-note on the importance of investing in early childhood, making the case as a highly cost-effective strategy, leading to better health and education and to increased national wealth, while reducing the social cost of addressing the long-term consequences of violence in childhood. She emphasised that the first 1,000 days of a child’s life are the foundation for a person’s whole future development. Mrs. Santos Pais called for the role of States to enforce legal prohibition of all violence against children, including within the home, as well as implementation of policies to support families in their child-rearing responsibilities, helping change mind sets and behaviours that support violence against children.

H.E. Archbishop Job of Telmessos, Permanent Representative, Ecumenical Patriarchate Permanent Delegation to the World Council of Churches, highlighted that protecting children from any kind of abuse is the most natural message of Christianity. Unfortunately, abuse is not something that may happen outside the Christian community but can also happen within it. Therefore, Christian communities are called not only to protect children from child abuse and psychological violence in the society, but also within themselves. He emphasized that through the “Churches’ Commitments to Children” initiative, the WCC and UNICEF are now providing support to ensure that effective safeguarding measures are in place in all churches. 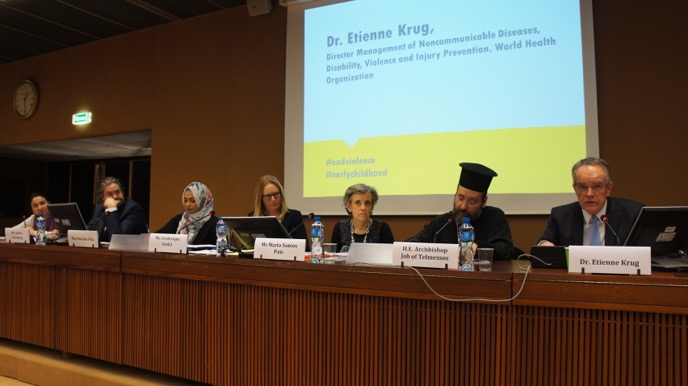 Dr. Etienne Krug, Director Management of Non-communicable Diseases, Disability, Violence and Injury Prevention from the World Health Organization, highlighted that 1 in 2 children in the world are affected by violence every year, having long term consequences in mental health, anxiety, depression, as well as change in behaviors later in life leading to alcohol abuse, unsafe sex practices, unwanted pregnancies, among others. When violence occurs in early years, when the brain is developing, the impact is even worse. He shared that WHO and UNICEF, in collaboration with many other partners, will launch in May 2018 a global Nurturing Care framework for early childhood development that brings together essential actions across health, nutrition, safety and security, responsive caregiving and early learning.

Mrs. Neelam Fida, Global Child Protection & Inclusion Advisor from Islamic Relief Worldwide, “Engaging faith leaders and communities is critical in dismantling myths of religious and cultural misinterpretations that support abuse and violence against boys, girls and women. Mrs. Fida shared several examples of work training male and female faith and community leaders on child protection, and how religious leaders have been engaged designing Friday sermons that discourage violence against children, reaching out up to 10.000 people.

Mr. Aaron Greenberg, Regional Child Protection Advisor, UNICEF Regional Office for Europe and Central Asia, highlighted that “300 million children between ages of 2-3 years old experience violent discipline. He noted that tackling the issue of violence against children requires that we see the problem, not as an issue “about them but about us.” We all have been victims of violence. At the heart of this there is a spiritual journey for us to go on, as communities, as societies, as the world, in which religious communities can play an enormous role”. He also shared several good practices that contribute to end violence in early childhood, developed by UNICEF in collaboration with religious communities around the world.

Mrs. Maria Lucia Uribe, Director of Arigatou International Geneva, emphasized the importance and also challenges of working together with religious communities. She mentioned that one of the main hindrances in involving religious communities towards ending violence against children in early childhood is the distrust with government authorities, despite their critical role. She called for increasing the evidence base on the role of religious communities, particularly challenging social and cultural norms that justify violence in early childhood and the positive role that they play in fostering values and spirituality in children and supporting families in creating safe environments.

The interventions were followed by a dialogue with the participants, calling for better collaboration among different actors and sectors; the inclusion of religious communities in national programs and strategies; the important role of self-examination within religious communities to challenge theological interpretations that can justify violence against children; as well as measuring the impact of their work.

Agenda 2030 presents us with the unique opportunity to create genuine partnerships to leave no one behind, and we should ensure that no partner is left behind either in this important endeavor to end violence against children in early childhood.