The Contributions from Religious Communities to Ending Violence against Children: A Timely Conversation on the Margins of the Human Rights Council 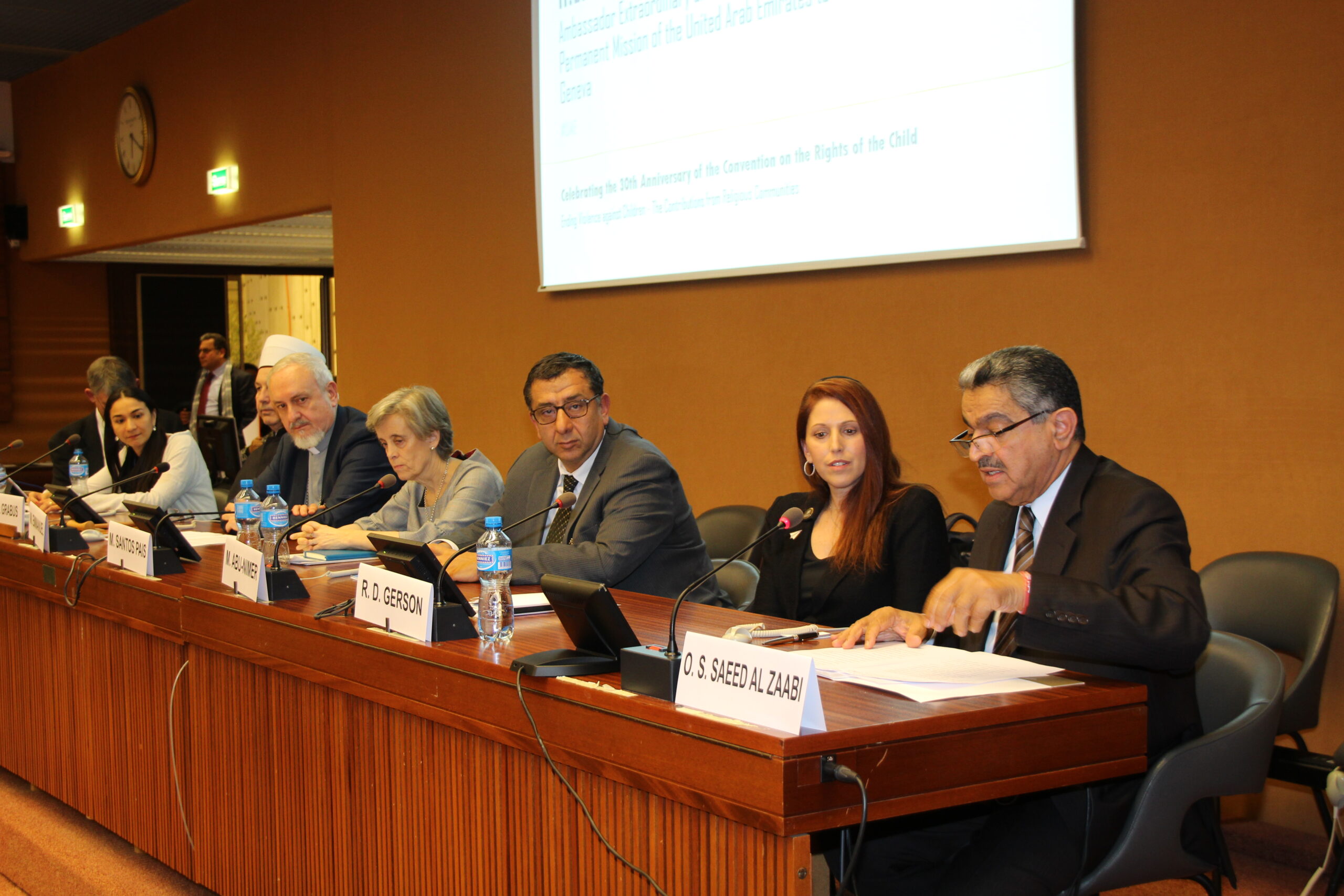 In light of the 40th session of the Human Rights Council, Arigatou International co-organized together with several partners, a side event to celebrate the 30th Anniversary of the Convention on the Rights of the Child: “Ending Violence Against Children – The Contributions from Religious Communities”, on 6 March 2019. The event was attended by over 100 people and more than 20 representatives from Permanent Missions to the United Nations in Geneva.

The Convention on the Rights of the Child (CRC), a human rights treaty that led to a paradigm shift about children, regarding them as individuals in their own right, was adopted by the UN General Assembly on 20 November 1989. Its 30th anniversary provided the opportunity to both celebrate the achievements made to protect and promote the rights of the child, whilst reflecting on the challenges ahead.

The objectives of the event were to foster reflections on the connections between religion and children’s rights, and on the role of religious communities to challenge social and cultural norms that condone violence against children; discuss some of the concerns and reservations made on religious grounds to the CRC, and share good practices of how faith communities have contributed to its ratification, withdrawal of reservations, and implementation. The event was organized as a contribution to a major Multi-Religious Study on the Contributions of Religious Communities to the 1989 Convention on the Rights of the Child, that is being developed by Arigatou International and the Office of the Special Representative of the Secretary General on Violence against Children, and other partners.

The opening remarks were delivered by H.E. Mr. Omar Zniber, Ambassador, Permanent Representative, Permanent Mission of the Kingdom of Morocco to the United Nations in Geneva: “The role of religious leaders is one of the most important, which could lead us to fulfill our common goals” of preventing and ending violence against children. 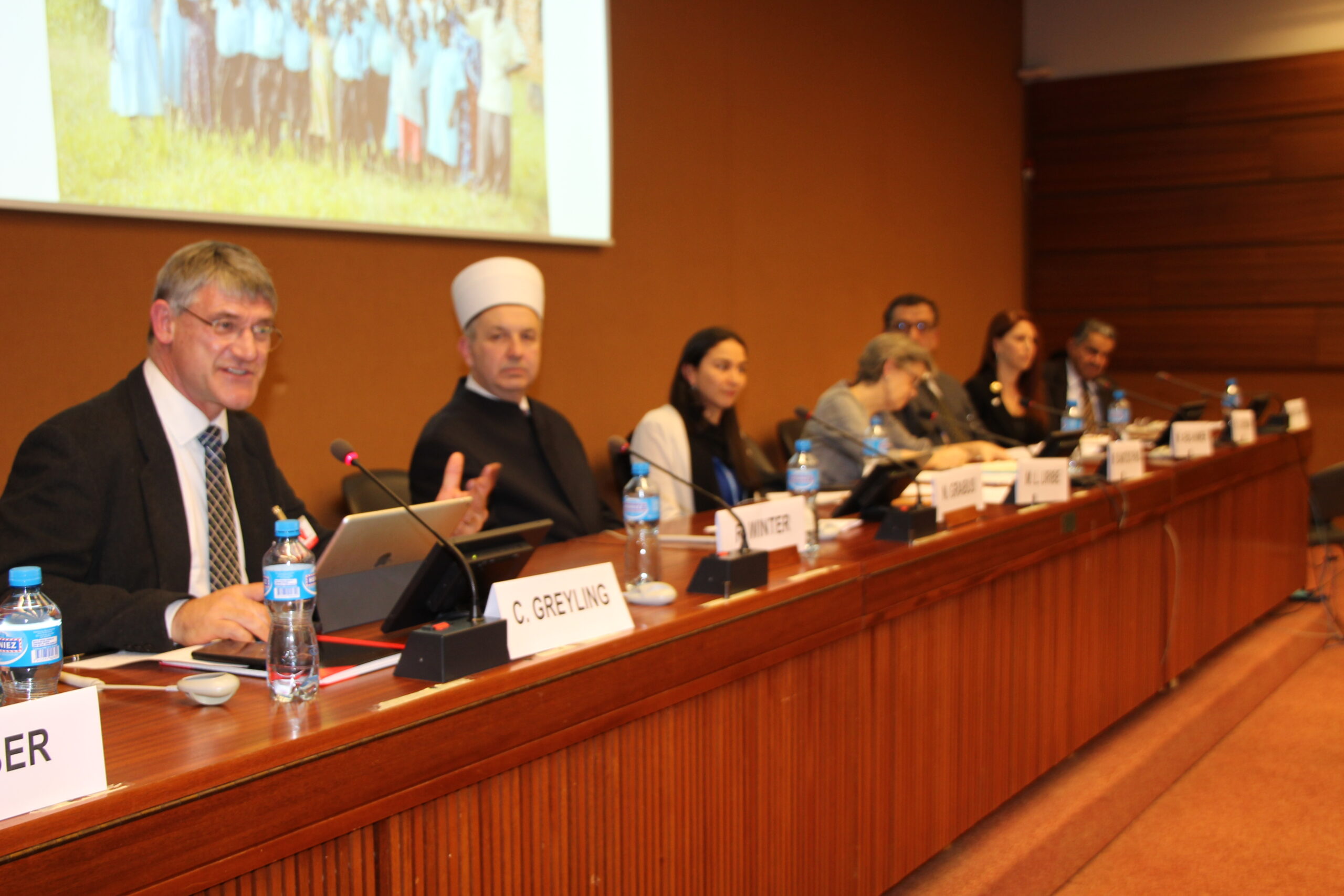 Throughout the discussion, the speakers shared best practices for collaboration: “We need an inside-out strategy, rather than outside-in. Interfaith work is far more effective than uni-religious initiatives”, shared Professor Mohammed Abu-Nimer, Senior Adviser, KAICIID. Ms. Marta Santos Pais, UN Special Representative of the Secretary General on Violence against Children, concurred, and highlighted the achievements already made with the adoption of the Convention almost 30 years on: “Children who are citizens of today and are not adults in the making, and who need to be respected in their views, including in relation to religion, and to be part of discussions and decisions that affect their lives,” she stated, emphasising the agency of the child and the importance of child participation.

Addressing the issue of the misuse of religion to perpetuate power structures that undermine children’s rights, Ms. Renate Winter stated that “We need the assistance of religious communities to prevent the instrumentalization of religions against children”. In a similar vein, H.E. Dr. Nedžad Grabus, Grand Mufti of Slovenia, highlighted the important and unique role that religious communities can play to improve and protect the rights of children but also emphasized the importance of dialogue and cooperation with secular entities.

In turn, Rabbi Diana Gerson, Associate Executive Vice President of the New York Board of Rabbis, and Rev. Christo Greyling, Senior Director, Faith and External Engagement, World Vision International, shared concrete examples of protecting the rights of children. Rabbi Gerson shared a firsthand experience of responding to a case of child sexual abuse, and the instrumental role played by an earlier workshop on the topic held by the Rabbi herself. Dr. Greyling described an experience of a religious leader preventing a child’s marriage in Uganda. These stories highlighted the fact that religious leaders are often the first responders in violence against children, in supporting families and protecting children from harm. 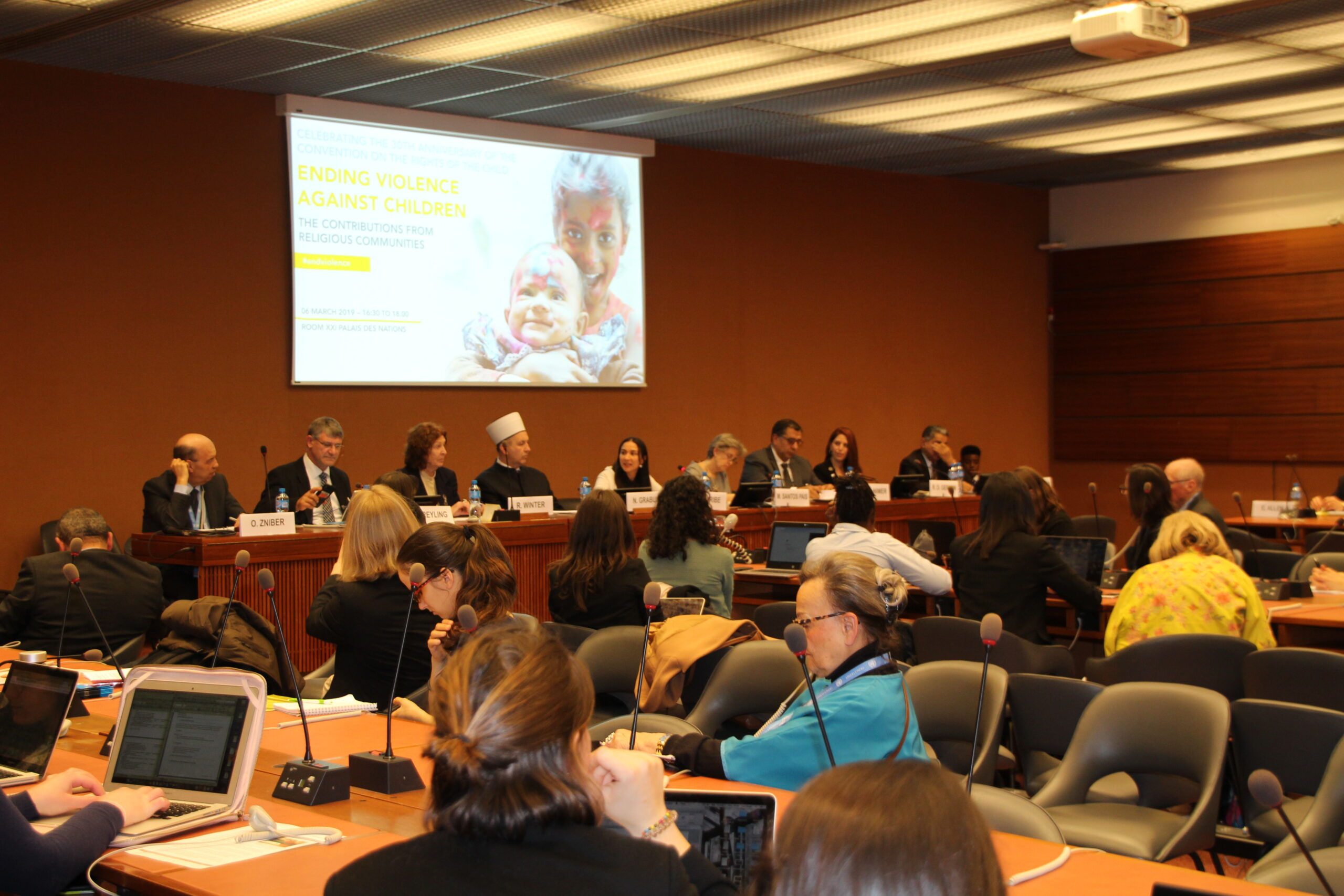 Closing the session, H.E. Mr. Obaid Salem Saeed Al Zaabi, Ambassador Extraordinary and Plenipotentiary, Permanent Representative, Permanent Mission of the United Arab Emirates to the United Nations in Geneva, remarked that “religious communities have a key role in advancing children’s rights, promoting, protecting and preventing violence against children, in the name of religion, in collaboration with governments, civil society organizations, and others.” The event ended with an affirmation and agreement by the panelists than no religion condones violence against children, and further work must be done to end the justification of violence against children in the name of religion.

H.E. Metropolitan Emmanuel of France underlined the tone of the entire panel in calling not only for further interfaith dialogue, but interfaith action: “Children do not only represent our future, but our present upon which the future is being built”. H.E. Emmanuel also highlighted the need for further reflection around the digital world, in which young people have an increased presence, which can be a “space of discovery” but also a “space of danger”.

The panel was moderated by Ms. María Lucía Uribe, Director of Arigatou International – Geneva, who brought the two-hour discussion to an end by inviting the attendants to a reception to present the interactive exhibition “Child Dignity Online”, organized by the Interfaith Alliance for Safer Communities. Dr. Ernie Allen, Chair of WeProtect Global Alliance, welcomed participants to the reception, and presented key facts around the topic of the presence of children in the digital world.

We would like to express our deep gratitude to those who supported and attended the event.

The live streaming of the event, can be found here.