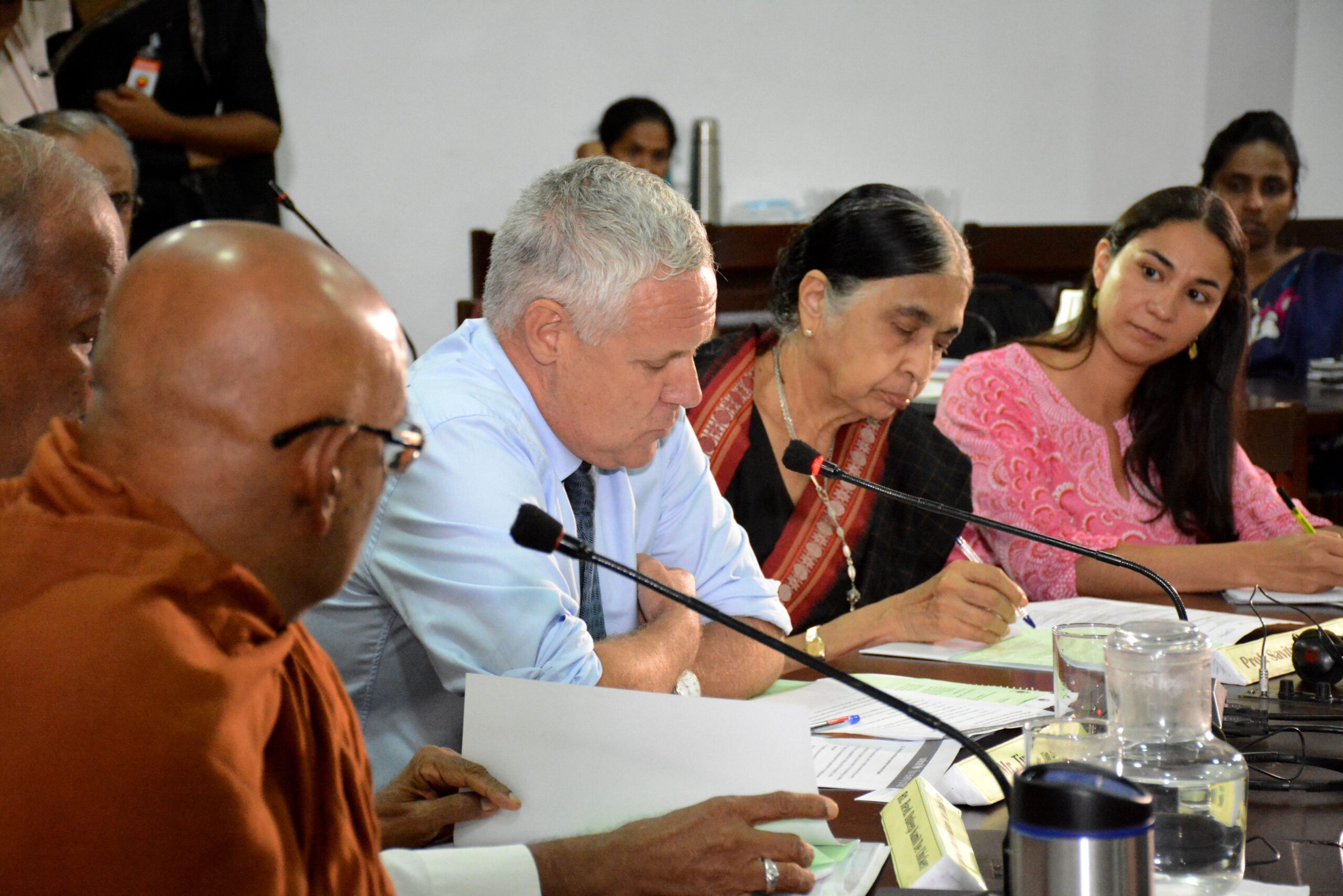 A multidisciplinary panel of experts gathered together in Colombo, Sri Lanka to participate in a roundtable discussion on the topic of Ethics Education to Strengthen Families and Nurturing Spirituality in Early Childhood, particularly addressing the role of religious communities.

The roundtable, which took place on 23 August 2017, was organized by Arigatou International Geneva, in collaboration with Sarvodaya, Walpola Rahula Institute, and the Global Partnership to End Violence Against Children.

The discussion aimed to reflect on the state of violence against children in Sri Lanka, particularly in the family setting and its effects on early childhood development, as well as identify the environmental and societal factors related to poverty and violence that hinder or foster the ability and possibilities for positive parenting. Panelists also reflected on the role of religious communities in challenging cultural and social norms that justify violence, along with their role supporting families in nurturing values and spirituality. At the end, participants had the opportunity to share good practices with the panelists and the other attendants.

In her opening remarks, the moderator, Mrs. Maria Lucia Uribe, Director, Arigatou International Geneva reminded the audience that “violence is not only experienced physically, but also through emotional abuse, rejection, humiliation, isolation, and neglect, as well as through the structures that support gender inequality, discrimination, and the use of children as objects for abuse, exploitation, and trafficking.”

Professor Savitri Goonesekere, Board Member, Global Partnership to End Violence Against Children opened the floor expressing her concerns about the current state of violence against children in Sri Lanka and reflected on the causes that drive this kind of behavior.

Religious leaders from the panel acknowledged the relevant role they can play in challenging cultural and social norms, as well as patriarchal structures and practices that perpetuate or justify violence against children. Ash Sheikh S. H. M. Faleel, Head, Academic Programs and Senior Lecturer, Jamiah Naleemiah Institution for Islamic Higher Studies stated that “Every child is born pure. It is the environment created by his parents that determines his future.” In the same way, Br. Darshan Chaitanya, Representative, Chinmaya Mission argued “violence against children is an expression of anger, intolerance and perversion, and an effort to dominate and to obtain obedience,” making this an adult-created issue.

Most Ven. Dhammajiva Maha Thero, Founder and Spiritual Leader, Sati Pasala Foundation recommended the introduction of nonreligious mindfulness as a preventive method to face violence. As for Rt. Rev. Duleep Kamil De Chickera, Former Bishop, Anglican Church, he proposed “respect and dignity for the child” as the Christian approach to deal with violence against children.

With the same approach, Mr. Tim Sutton, Country Representative, UNICEF called upon churches to be the “torchbearers in preventing violence against children,” and reflected on the prominence of religious leaders in society as people that command great respect, influence thinking, and foster dialogue.

“It has been well proven that experiences of violence, neglect or abuse during early childhood causes chronic activation of the child’s stress system”, affirmed Dr. Hiranthi Wijemanne, Former Vice Chairperson of the Committee on the Rights of the Child and expert on child protection. She continued her intervention bringing the attention to the latest data available on early childhood development, and the impact these first years can have in a person’s life. Some of the consequences can only be perceived in adulthood.

Dr. Vinya Ariyaratne, Secretary-General, Sarvodaya encouraged all participants to come together, “using the rich resources found in religion and in civil society organizations inspired in spirituality”, and contribute to putting an end to violence in the family context.

At the end of the session, participants shared good practices and ideas to help create a movement to tackle violence in early childhood in Sri Lanka. Ven. Galkande Dhammananda, Chairman of Walpola Rahula Institute proposed the creation of and an inter-religious network to share experiences, ideas, and resources.

This roundtable discussion is part of a series of events that Arigatou International Geneva is organizing to support the conceptualization and design of a new international program that aims to mobilize religious communities to support families in fostering values and nurture spirituality in child upbringing, and challenge cultural and social norms that justify violence against children in the family setting, as a contribution to the commitments made during the GNRC Fifth Forum held in Panama.

Our most heartfelt thanks go to Sarvodaya, Walpola Rahula Institute and the Global Partnership to End Violence Against Children for co-organizing this event; to the Arigatou International offices in Nairobi and New York, for their support; to the panelists for their valuable insights and sincere spirit of collaboration, and to all the attendants for their enthusiastic participation.

The report of this roundtable discussion is available HERE.

To watch a summary video, and videos of each intervention, click HERE.