Arigatou International Geneva at the Parliament of World’s Religions 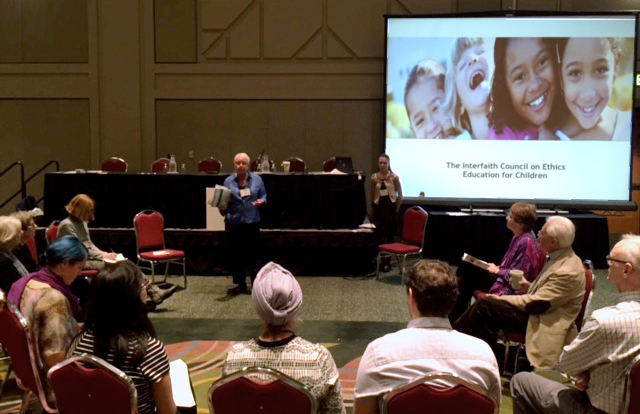 The Parliament has been held once every five years since 1893 and is the world’s oldest, largest and most inclusive interfaith event for the global interfaith movement.

At the Parliament, 10.000 global and religious leaders, grassroots activists, and practitioners from 50 traditions and more than 80 countries came together to learn, exchange ideas and interconnect as a contribution to achieving a more peaceful, just, and sustainable world.

His Holiness the Dalai Lama, who was initially one of the keynote speakers, could not attend the Parliament. Nevertheless, he left a message to all the participants emphasizing the importance of compassion, to see the humanity of the other and in the other; the interconnectedness and the need to take action underlying that “real change will take place when individuals transform themselves guided by the values that lie at the core of all human beings”.

Arigatou International representatives participated in several workshops, such as Eboo Patel’s discussion on “Interfaith Cooperation Imperative: A Call to Action”; “Ending legalized Violence against children” organized by Save the Children and the Global Initiative to End Corporal Punishment of Children”; and “Building Bridges and Overcoming Interfaith challenges using Dialogue” from the Middle East Partnership Initiative.

During the Parliament, Arigatou International organized a workshop on “Learning to Live Together as a Contribution to Promoting Interfaith Learning, Tackle Violence against Children and Foster Peace Building”. The workshop took place within the theme “War, Violence and Hate Speech” and aimed to reflect and identity together with the participants, ways to encourage young people to build bridges of trust and work together across religious and cultural divides, so as to contribute to peace building in their surroundings.

Teachers, social workers, caregivers and community leaders joined the Ethics Education workshop and were introduced to the Learning to Live Together Programme and its Educational Approach.

The workshop was organized in three moments.  During the first moment, participants were introduced to Arigatou International and its four initiatives. It was followed by a group discussion and exchange of ideas on the issues affecting children at the school, community, family, and at individual levels, that can be justified by religious and cultural norms.

The workshop concluded connecting the issues identified by participants with the Learning to Live Together and its Ethics Education Approach, as a contribution to end violence against children and foster peace building.

Arigatou International was represented in the Parliament through two staff members, Ms. Vera Leal, Ethics Education Program Officer, and Ms. Masue Suzuki, Prayer and Action Program Officer. A special thanks goes to our Interfaith Council Member Ms. Jane Rechtman for joining us in preparing and facilitating the workshop on ethics education.